MannKind Corp. (MNKD) is our TraderHR Free Stock Pick for Friday December 10.  It gained 50 cents, or 7.45%, Thursday on double-than-average volume, closing at $7.21, the highest close since March 2010. The stock is trying to break strong resistance around the 7.20 area.

Another indication of a possible trend reversal is the double-bottom pattern, with MNKD reaching a bottom in May at 4.76 and again in November at 5.07. If current momentum continues MNKD could reach its next resistance level around the 8.10-8.50 area. Preferred entry (buy stop) price is 7.35, with a stop loss at 6.80.

There's a lot of chatter lately about how boring the market is. I'm inclined to agree. Just take a look at the VIX over the past couple of years. We've gone from The World Is Ending Now (VIX approaching triple-digits) to Everything Is Peaches 'n' Cream (VIX approaching historic lows).

For my own trading day……..I got out of my CYH short early on with a profit (I am flabbergasted at how it's zoomed since then, but I'm glad not to be part of it). The big wrench thrown in my day was my BEC short, which lurched hugely higher this morning. That one position (out of 75) represents the difference between a losing day and a winning day for me today.

As always, individual equities usually account for only about 0.5% of my portfolio, or less, so it's not devastating, but any short that opens nearly 30% higher is going to put gloom on the day.

In any case, I'm busying myself with other things since the blog and market are so quiet now.

I normally focus my posts on hard asset stocks, but DRN jumped out at me.  Interest rates backing up is starting to have an effect, IMO.  The chart looks primed for a fall, and I see a potential measured move to the $37.50 area.

SPX has been trickling up on a daily closes basis the last few days, and there's still a bit more upside to come I think. For the conclusion of this wave up I'm still looking at the rising wedge from the summer lows, and that would put the target this week in the 1257 – 60 SPX area, so the 1252 – 1255 ES (March) area: 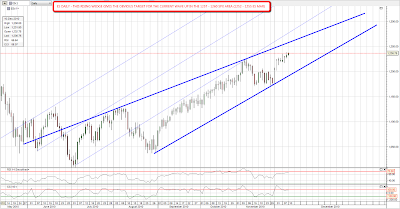 I have some doubts that target will be made though, and the shorter term charts aren't particularly encouraging in that respect. Looking at the 15min chart on ES (March) I'm seeing resistance in the 1242 – 44 area today if ES can make it off the support trendline. A break with confidence down from 1229 ES would most likely be followed by a significant further push down: 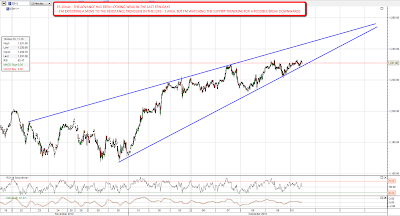 EURUSD is still making lower highs and lows but has been spending too long consolidating here. A more serious push up or down looks likely to start soon and I'm favoring a push down. That would most likely carry equities down with it to some degree: 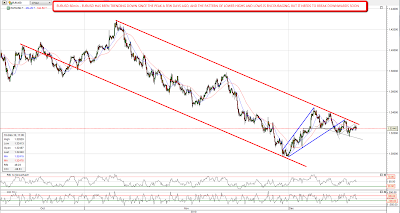 Oil is also stalled with the obvious next move seeming to be upward towards strong resistance just under $92. A break below $88.25 would suggest that oil won't make that target: 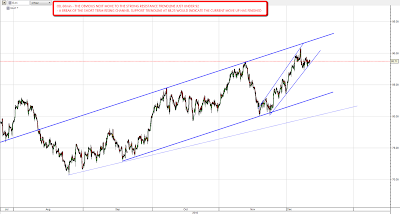 I'll leave you today with one of my favorite long term charts, which is the ten year weekly sugar chart. Sugar is looking toppy to me here, but the reason I like this chart so much is that it is a great example of some of the very strange short term moves one sometimes sees on futures charts. If you have a close look you'll see that there was apparently an opportunity to buy sugar at or very near zero near the end of 2003. Not something you see very often: 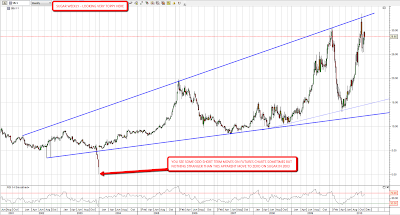