I offer you some more Juliet Letters – this time, a song about what's going on inside the minds of adults about to divorce, as reflected back through their childhood. These are the kind of lyrics that draw me back to the song again and again:

Seriously, watch it; it's brilliant.

I love newspapers. I don't know where I'd be without my New York Times every day.

But there's no worse newspaper, in my experience, than USA Today. It put the "ban" in "banal". During the rare instances that I travel, it's the newspaper that lands on the door to my hotel room, and even then I don't bother reading it.

So I otherwise wouldn't have been aware of its front page today, but a thoughtful Sloper sent it to me:

Yep, that's right. Wall Street is telling you to Get Back Into STOCKS. And you'll be getting them at sensational bargains, to boot!

I'll close by asking the USA Today Marketing Department – – of all the Cohens you had to choose from for this article, did you really have to land on Abby Joseph? She's like eye candy for masochists.

Yesterday's bear setup was a disappointment. The ES and EURUSD channels both broke up but the really interesting action happened overnight, mainly because of what should have happened, but didn't. I'll explain with the charts.

EURUSD broke the short term declining channel at the close yesterday, and as I expected it rose quite a bit overnight. A short term rising support trendline was established overnight which has just broken while I've been writing: 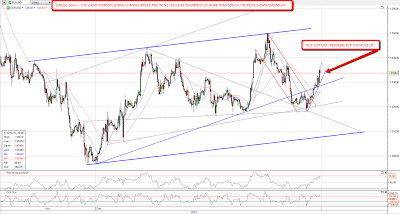 Generally speaking, in a move which saw EURUSD rise over 120 pips, I'd expect to see other USD currency pairs and equities rise too, but that is the very interesting thing that didn't happen last night. Of the currency pairs GBPUSD didn't move much or at all: 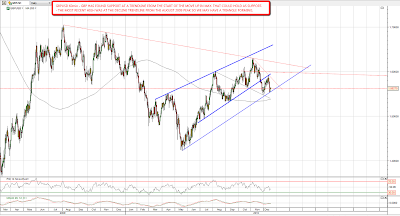 On equities ES and Nasdaq were flat, and the Nasdaq broadening descending wedge that I posted yesterday is still intact, though there was a pinocchio up through it at the close: 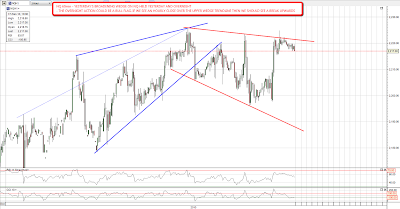 So what does this mean? Possibly nothing, but the way I would generally interpret a dollar move down with equities flat is that equities are in a larger wave down, and will resume moving down once USD reverses back up, as it may be doing right now. While NQ and ES fail to make new highs, that's what I'm wondering this morning. It is worth mentioning with that however that the ES and NQ overnight could be interpreted as bull flags, and on Opex Friday all sorts of strange things can happen.

I've been having a look at gold and silver this morning and a nice looking declining support trendline has been established on gold. With the declining resistance trendline we could have a falling wedge on gold, though the resistance trendline really needs another touch to confirm it. If gold can make it back up to 1400 I'd see that as a bullish break: 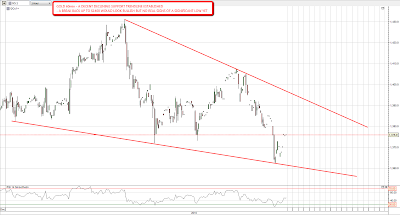 The silver picture looks more complicated and I've taken a broader view on that chart. Right now we have a triangle forming that could obviously break either way. I'm still leaning short on silver but a break up through the declining resistance trendline would look bullish. For the bear side a break down through the triangle support trendline would open up a return to the main support trendline from $18. If that breaks then the way is open for a much deeper retracement. 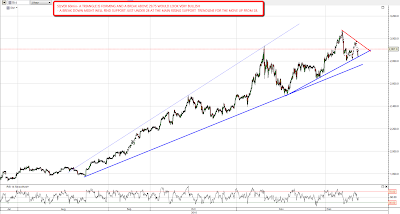 One comment to make about triangles though is that they are pigs to trade, as they have a very nasty habit of breaking in one direction and then playing out in the other. Wedges, which are a sort of triangle really, sometimes do the same with overthrows or underthrows, but generally to a lesser extent and with an easier exit on the reversal. Something to consider on silver particularly if that triangle breaks up.

A quick note on stops before elaborating on this trade: I mentioned in my previous market neutral trade post that due to the number of positions I am building up to (26 pairs, 52 positions), and the relatively small size of each, if I added stops, they would be wide ones.  I have added wide trailing stops since then. On a few occasions so far, there have been double digit intra-day percentage moves in stocks I've purchased or shorted in previous market neutral trades, e.g., IGTE, a long position, dropped about 20% in one day; CCSC, a short position, spiked over 10% last Friday; and JOE, another short position, spiked over 11% intra-day yesterday. Due to the wide stops I am using, I haven't exited any of those positions. Back to today's trade:

CLWR, a 4G wireless carrier which is 54% owned by Sprint, dropped yesterday on news that Sprint has no plans to buy the rest of the company.

CLWR has been burning cash as it grows subscribers, and currently has an Altman Z"-Score of about -0.75, according to Short Screen (recall that scores below 1.1 indicate financial distress). CLWR has been able to raise additional capital via debt financing recently though, albeit at a fairly high price. CLWR insiders have been net sellers of its stock over the last year.

Wireless networking company Telular Corp. (WRLS) has an Altman Z-Score of about 9.75, according to Short Screen. Recall that Z-Scores above 2.99 indicate financial strength (N.B.: Short Screen calculates a Z-Score for WRLS, and a Z"-Score for CLWR, because it goes by the companies' respective SIC codes: The SEC's website shows a manufacturing SIC code for WRLS and a services SIC code for CLWR, even though both companies are in the wireless communications industry).

Insiders have been net buyers of WRLS over the last year.