I have a serious question for you folks out there: are there any other sites like Slope?

What I am talking about are blogs which are:

+ Have an active, intelligent comments section;

+ Relate to the world of trading/finance in some way

I'm curious, because I can't seem to find any. Sure, there are tons of trading blogs out there – – including some highly trafficked ones – – but even those with comments seem to garner just a small handful (if any) for each post.

There are also some sites which have hundreds of comments per post………but they don't bother putting up a post except for once a week!

It's just hard for me to believe that in this world of six billion people, there's only one thriving community of traders on the entire Internet. Clue me in, please.

My only large position is TLT, which I bought this morning.

FOR FULL 3-D EXPERIENCE: Right-click on this link to open a new tab for accompanying music as I explain.

Because I believe in America.

Because I believe in America's future prosperity, strength, and ability to pay back its borrowed money with interest.

Because I believe good old-fashioned American know-how, pluck, and fortitude are going to guide us to our best days.

Because I believe our elected representatives are steering the ship of state through some rough seas into a calm port.

Ha! OK, OK, settle down. It's because of the Fibonaccis.

From historical data, the probability of a move greater than 5% to the downside after a confirmed Hindenburg Omen was 77%. The probability of a panic sellout was 41% and the probability of a major stock market crash was 24%. Though the Omen does not have a 100% success rate, every NYSE crash since 1985 has been preceded by a Hindenburg Omen. Of the last 25 confirmed signals only two (8%) have failed to predict at least mild (2.0% to 4.9%) declines. Once the signal has occurred, it is valid for 30 days, and any additional signals given during the 30-day period should be ignored. Wikipedia has a good page covering this and they update the page with new omens as they happen. You can find that here.

We had a string of HOs in August of course, and they were fully satisfied by the greater than 5% move down in late August.  What does this current omen mean in practical terms? Well it means that we're likely to see a greater than 5% correction in the next 30 days, but after a 200 point move upwards in the last four months, we don't need a Hindenburg Omen to tell us that we may well see a 5% correction in early January. It isn't a signal to go heavily short right here, the HO would be fully satisfied if we rose 10% from here and then dropped 5%. It is a warning to pay attention to downside risk.

Do I think there is an imminent likelihood of a 5% decline this week? Well no, but I am expecting more downside today and tomorrow, and having fallen almost 1% from the high on Monday, bringing that up to 2% certainly looks possible. On ES a nice declining channel has formed that I'm expecting to see play out further. Resistance is at 1237 ES at the moment and the downside target today would be in the 1225 area: 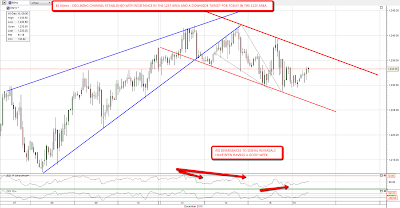 NQ is messier than ES and I have a sort of broadening wedge there, but it isn't something I'd see as readily tradeable: 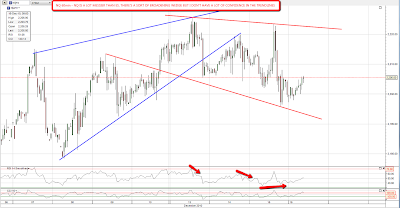 So why do I think that more downside is likely? Two reasons, and the first is EURUSD, which broke an important support trendline yesterday. More downside looks very likely and my next target is in the 1.308 area. The current decline is within a steep declining channel that would put that target within reach in the next couple of days, and should also signal when the current decline is over when it breaks: 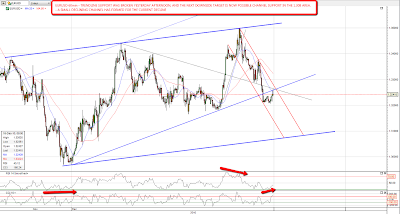 The second reason to think that more downside is likely here is the Vix. I''ve noticed that significant highs and lows on the Vix are usually signalled by negative or positive divergence on the 60min RSI respectively and I've marked those up on my 60min Vix chart. A low has been signalled here and I'd expect the Vix to rise further. Very unfortunately the broadening formation on Vix has been broken, and though I've seen that reinterpreted as a megaphone I'm not really seeing that myself so I have no upside target, but I'd generally expect the next downside reversal to be signalled on RSI too: 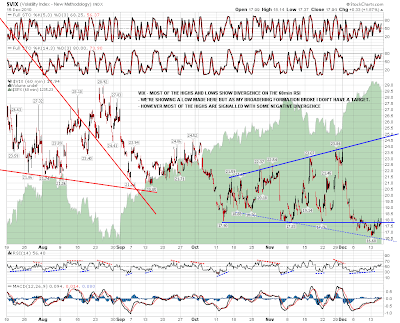 Oil's looking interesting here, though the signals are mixed. The upside target of the rising channel has not been reached and I'm seeing a topping fan suggesting that it may not be hit. A break below 87.75 that is sustained would mark a probable top made. The other view however is that action is recent days is forming a bull flag and that might yet play out. If oil can break 90 again I'd be looking for a hit of the upper channel line in the 92.50 area: 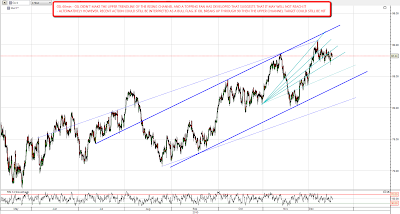 So there we have it and I'm leaning strongly short today. A break of those declining channels on ES and EURUSD would be bullish though, and if both were broken that would look very bullish. A lot of people are looking for 1250 SPX here and in that event we might well see that.