Just some symbols for you to ponder; please note about half of the items in my Bull Pen watch list I would buy only on a meaningful pullback; some of these (like TIF) are far, far too sky-high right now, in my opinion………..good night!

The form exhibited by the decline in Newmont Mining (NYSE: NEM) from its September 22 high at 65.50 into Monday's low at 57.31 has the right look of a completed correction into the area of the sharply rising 200-day moving average (57.18) amidst a glaring positive momentum (RSI) divergence.

This technical combination represents critical support that so far has provided a launch pad from where the price structure can pivot strongly to the upside. As long as last week's low remains intact at 57.31, this should be the start of a new upleg within an intermediate-term bull trend.

Google lost $26.40 (!!!) on Tuesday, evidently because they are about to hugely overpay for Groupon.

I entered the day short GOOG, and I find the chart below quite interesting. I've basically broken this up into four sections:

(3) Cyan – resumption of ascent, with massive gap-up due to earnings announcement

GOOG could be in for much lower prices.

Well, the one worrisome possibility I pointed out in my video last night has happened – – the Russell has clearly broken above the descending trendline I drew. This could make a bad 2010 even worse for any bears left. It seems just about the only stock down today is NFLX (of all things……..).

I have a dream for Xmas this year. My dream is that equities break up here and rally in December to make modest new highs while USD retraces. Then, having reached the SPX IHS and ES descending triangle targets in the 1245 ES area, we complete wave 5 up and we then have an equities wave down while USD powers upwards. A decent bear pattern for the next move up would be very welcome as well to identify the top, and to give the signal for when it will be time to exit longs and pile on the shorts. Another rising wedge like the one we saw in July would be ideal. That's my list and letter to Santa sorted out for this year & we'll see whether I've been a good enough boy this year for Santa to make my dream come true.

As it is, we're off to a promising start. Support on ES held yesterday and after a powerful move up overnight, ES is now within striking distance of the declining resistance trendline that needs to be broken to signal that the bullish December scenario is on: 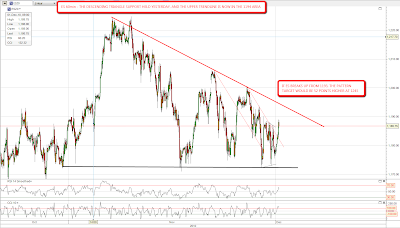 There were other promising signals yesterday. Silver and copper did well though NQ lagged ES very badly during the day and that is a real concern here as it should really be leading the way up. The rising channel I marked on NQ yesterday broke down, and I've marked an alternate in today, but I'm concerned that NQ may be forming an H&S here within the declining channel marked in red. We shall see if NQ can break declining resistance from the high, and if it can, I will take that as confirmation that the bull scenario is playing out. Until that happens NQ is showing a red flag that could signal a bearish reversal:

EURUSD bottomed nicely at my very theoretical support trendline yesterday and has since bounced strongly. If it was to return quickly to the top of the channel it would hit it in the 1.34 area, but that would look too impulsive, and would suggest that the recent USD move has just been a rally. I'm expecting more sideways action than that and we'd ideally see EURUSD trade sideways towards a hit in the 1.32 area in late December:

GBPUSD didn't quite make it to my declining channel target yesterday, but the short term falling wedge has broken up with confidence and a small IHS may now be forming. Again I'm looking for sideways action rather than an impulsive move up. Worth noting on this chart is that GBPUSD has reached the right area to reverse back down again if that falling wedge is evolving into a declining channel. That lower declining channel trendline might yet be hit:

I've been neglecting the major commodities and minor USD currency pairs in my daily posts recently, partially because I lost all the trendlines on my commodities charts when my main charting computer crashed last week. I'm planning to post the main ones I follow at least once a week in future and I have oil today, where I have a small rising channel within a larger rising channel on the 60min CL chart: 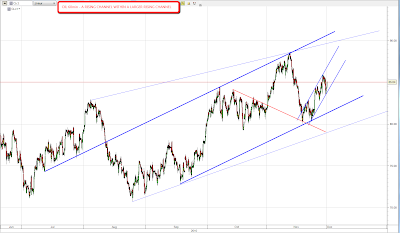