As a native of the deep south, I have no problem with southern accents. Of course, there isn't just one southern accent, just like there isn't just one Texas accent. A person from Georgia is going to sound very different from a guy from Mississippi or a person from South Carolina. And if you're from Florida, well, you probably don't sound like anything special at all.

My beef is with how Hollywood portrays the southern accent. It seems their voice coaches basically tell the actors to sound like Elmer Fudd. Sally Field, for instance, as Forrest Gump's mother, seems to follow this advice to the letter. "I'm dyin', Fowwest." Look, someone from Alabama doesn't do the whole "kill the wabbit" schtick.

Well I'm out of hospital and getting used to getting round on crutches (Editor's Note – we have here further proof that Slopers are tough traders!). Getting fully back to my usual routine is still hampered by having to spend much of the day with my broken leg up for the next week or so, and by the significant amounts of opiates I am taking which are making me a bit groggy. Nonetheless I've been having a good look at some charts this morning and if everyone will cut me some slack for my codeine-tinted vision then I have some interesting charts to show today. Many thanks for all the supportive messages from everybody this week :-).

I've been caught somewhat by surprise by this latest reversal this week, which I wasn't expecting after the ES break up through declining resistance before Tuesday's open. The reversal is significant, but hasn't yet done any major technical damage, and to see why I'll post the updated and unamended versions of the RUT and NDX daily charts that I posted on Thursday last week so you can see what I mean. Here it is on NDX: 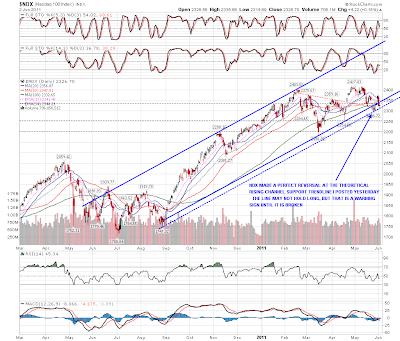 Here it is on RUT and you can see that NDX and RUT have both touched again, and so far bounced precisely at, the channel support trendlines I posted last week. That's not to see that equities won't decline further, but it underlines that significant support is still holding so far, and that we reached a possible bounce level yesterday: 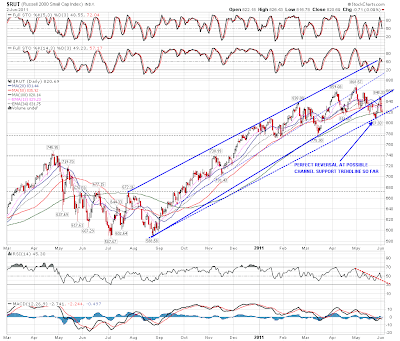 One thing we're not seeing on this move down is any support from a falling EURUSD so far. EURUSD has been in a tight uptrend channel since the recent low and the equities waterfall this week hasn't halted that rise so far:

Copper is still holding an uptrend as well, though the rising wedge forming looks bearish and we may see a quick move to 395, and possibly 385, if short term support breaks:

As I'm writing ES is testing 1295 and those trendlines on NDX and RUT look likely to break at the open. A strong move down today could move us out of the current trading range on Vix that's been holding since March: 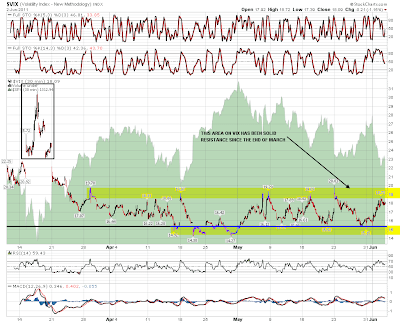 I posted the four year chart of the SPX daily bollinger bands last week to show that there was almost always a strong rally after a break down through the daily bollinger bands on SPX. We saw that strong rally afterwards last week and if the pre-market fall on SPX is sustained, SPX will break down through the daily BBs again today. Thanks again to Pug for posting the original of this excellent chart: 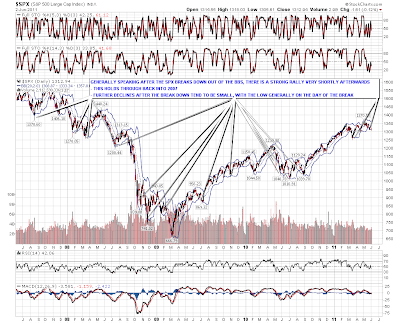 As an aside the longer term XLF chart is looking very interesting this morning, with XLF still crawling down declining resistance from the 2007 high. There's definitely scope for XLF to move back down below 14 within the two year trading range since August 2009: 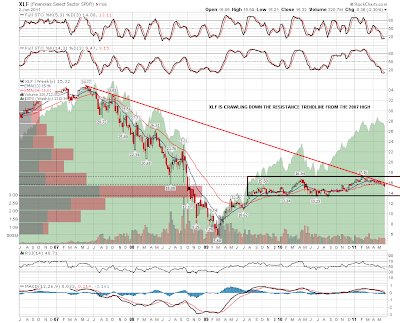 I'm seeing some immediate support for ES at the 1295 level today, and there's a possible H&S neckline in the 1290 area slightly below. If we do break down out of the SPX daily bollinger bands today then I'll be looking for a short term low to be established on SPX today or Monday that should deliver at least a decent bounce. I'll be having a broader look over the weekend to see whether I can get a better idea of where this is headed, though a retest of the March lows in the next few weeks as Pug and others are expecting seems very possible from here.

This whole cyclical bull market was either an a-b-c correction during a secular downtrend, or– if this trendline holds and prices make a new high– that changes the structure to a five wave advance!

Since we find ourselves in another Internet bubble – and, believe me, being here in Palo Alto, I'm sensing it more acutely than those in other parts of the world – I wanted to touch on a phenomenon I've witnessed recently.

As we all know, investors really never learn from their mistakes. Human behavior repeats itself, over and over again, which is pretty much the basis for using patterns for predictive value. Given the insanity of 1995-1999 and its devastating aftermath from 2000-2002, you might think investors would shun Internet stocks until, oh, about 2037. However, since LinkedIn has set everyone ablaze with excitement, the investing public is more than happy to give it another go.

I know a lot of venture capitalists, and naturally they bristle if I ever challenge the notion that the new crop of Internet darlings might not necessarily be great long-term enterprises. To a man, they state that It's Different This Time because….

+ these are real companies…..

When I hear this, I yearn for a few awkward moments of silence and then – off in the distance, at the far side of the room – the sound of one man, slowly clapping, as if to mock what had just been uttered without one hint of irony.

Real revenues. And real profits. Whoop-dee-freaking-do. Do you want a medal or something? They act like the fact that a business is actually capable of generating a little more in revenues than expenses means they should hold a parade. It's all well and good that the business generates a profit, but…….news flash, gents!…….that's what a business is SUPPOSED to do!

I am sure that Facebook, Zynga, Groupon, LinkedIn, and a few others are going to be with us for a long, long time, and they're going to make plenty of founders and early employees rich. But excuse me if I don't get a boner about companies that manage to throw off a profit. That sort of thing was perfected a few thousand years ago.