Thanks for a fantastic week, everyone! Relax and charge up for another one!

I pointed out triple-bullish DRN as a short candidate.

Just another short post today but I'll post a few charts just because equities are at a key crossroads here. We had the bounce I was talking about yesterday morning and it fell back from the 1290s on ES as I expected. The most obvious path is down from here now, but TF and NQ are still at the key support levels I posted two days ago, and an IHS is forming on ES that could develop into a larger bounce into the 1310 area:

SPX closed back within the daily BBs yesterday for the first time in four days. In an uptrend that would signal the start of a strong rally but we're in a downtrend of course, and I don't think we've seen the low yet. I've taken a capture of the SPX daily BBs for the first six months of 2010 to show how SPX BB  lows were made during the April to June period while equities were also in a strong downtrend. A strong rally from here without further lows is clearly not to be relied upon even if SPX can recover 1300 in the short term: 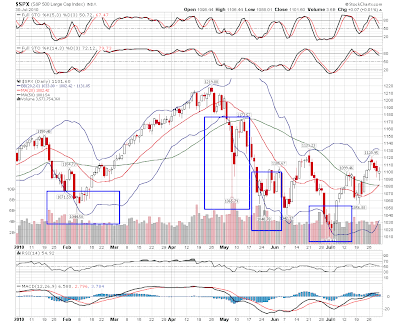 I posted the broken rising wedge on copper on Wednesday and it has been testing the broken support trendline since. In the short term copper needs to get below support at 405, and then there is another strong support level at 395 before it can get to the pattern target at 385. I'm looking for a major swing low for copper in the 365 – 375 area and this might be what we see in the next few days.

EURUSD is finally retracing after the strong move up that we've seen in recent weeks. That's hard to interpret here on an intermarket basis as it was rising strongly during the recent move down on SPX, and fell yesterday while SPX rallied. More downside on EURUSD looks likely here from the chart and that should depress commodities and might well provide the trigger to take SPX down to the 1245 – 1250 target that should be the next swing low. Equities and EURUSD correlating inversely is an unnatural state of affairs and rarely lasts long, so I'm expecting the normal positive correlation to resume shortly:

Overall I'm leaning short but bears need a new low soon, ideally today to kill the potential IHS on the ES chart. The key resistance level for today on ES (June) is 1286.75 and a move over yesterday's highs would indicate to 1310 on ES.

Normal daily posts should resume next Monday. I'm recovering well and am expecting that I should be able to spend much longer periods at my desk next week.