Sorry to have been so out-of-pocket today. There were a couple of reasons for this.

First, I was very occupied all afternoon with a cool project I'm doing. That gobbled up my usual "free time."

Second – and far more important – I had network troubles all day long. I actually pay for two broadband service providers, Comcast and AT&T, since having connectivity is so important to me. Well, Comcast was pretty much dead in the water, and AT&T isn't exactly the greatest service. For instance, you can't send email. No, I'm not making this up.

In any case, if you ever want to see me really high-strung, stressed-out, and nervous, take away my Internet during trading hours. It's not a pretty sight. Luckily, my portfolio was very light, and I was relatively happy watching the market puke higher without my companionship.

I feel bad not contributing much to the blog today, so before I sign off for the night, I wanted to offer up one trading idea. That is, a short on Comtel with a pretty tight stop at 26.68. This is a gap-fill trade. It's not perfect, but I'd give it a B+.

Provided the geniuses at Comcast have their service working tomorrow, I should be in better shape. With the big FOMC announcement and the press conference following, I'll want to be on top of things.

Anyway, thanks for your patience with me, and good night to you all.

My broker can't find a single share, but just to mention it – here's the triple-bullish-on-real-estate in a gorgeous formation. This will be my last post until late tonight, as I have a very full afternoon. I hope everyone had a great day today!

Vix closed down yesterday, and that has delivered a confirmed Vix buy signal. The performance on these has been impressive since the bear market low in March 2009, and my bias has shifted towards buying the dip on the strength of that, and the other indications that we have seen at least an interim low, if not necessarily a very major low: 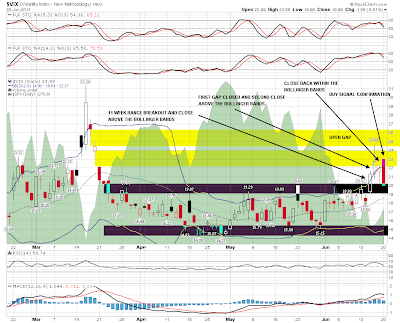 As for what sort of a low we have actually seen, it looks ominous to me, suggesting that we'll revisit these levels to make better quality lows or break down later in the summer. Meanwhile though, SPX and RUT have bounced almost precisely at the 200 day SMAs, though NDX went a little below. The broadest measure of US equities is the Wilshire 5000, and that has also made a nice looking low at the daily 200 SMA, and as with all three of the others seems to be bouncing to form the right shoulder on a large H&S pattern: 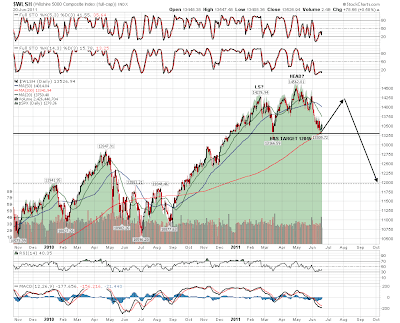 In the very short term however ES and TF are hitting overbought levels on the hourly RSI, and all three of ES, NQ, and TF are approaching important resistance levels that might well deliver significant dips in the next couple of days. First on ES I posted a broadening descending wedge last week that is still very much in play. I've altered the low trendline since somewhat, but the upper trendline with four touches is very significant resistance, and is at 1284.5. If we are to see a pullback today, it will most likely be from there and a break up through it would look very bullish, albeit that the pattern target is only to 1290:

Of the three, it's TF that looks the most interesting to me this morning, as the possible rectangle that I posted last week on TF has continued to develop very nicely and has a very nice target at 815.1 on a break up. I like rectangles as I've found these to be reliable performers on the indices in the past so I'm watching this rectangle very carefully:

I was talking about the need for declining resistance on EURUSD to be confirmed and it was confirmed yesterday, with EURUSD crawling down the trendline for several hours. That's a characteristic of an imminent breakout generally, and sure enough EURUSD broke up through it overnight. The target of the broken broadening descending wedge is 1.465. The immediate target that springs immediately to the eye however is the strong resistance level and potential IHS neckline at 1.45. There is a bearish aspect to this breakout however and it is that EURUSD is forming a sloppy rising wedge with next resistance in the 1.44 area and with strong support now in the 1.43 area. I'll be watching both levels with interest for direction:

The last chart of the day is GDX, which has received an impressive battering recently. However a bullish falling wedge has formed and GDX is trying to break up from it. If it breaks up then the pattern target is 58.50, which is also a potential IHS neckline: 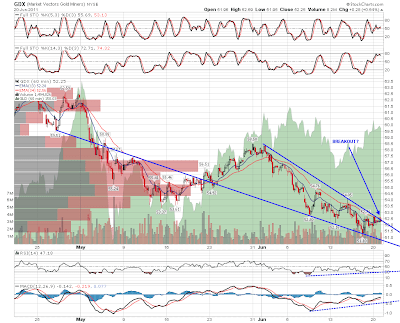 All in all I'm now leaning bullish on the view that we have now seen at least a multi-week low. As I mentioned though, short term the indices are looking overbought and are approaching some key resistance levels where we may well see a reversal today and tomorrow. I'll be buying that dip if we see it.