The Chicago Board Options Exchange Market Volatility Index (VIX) declined 2.56% Monday to close at 20.56. The table below shows the costs, as of Monday's close, of hedging 20 of the most actively-traded stocks against greater-than-20% declines over the next several months, using the optimal puts for that.

For comparison purposes, I've also added the costs of hedging the SPDR S&P 500 Trust ETF (SPY), the SPDR Dow Jones Industrial Average ETF (DIA) and the Nasdaq 100-tracking ETF PowerShares QQQ Trust ETF (QQQ) against the similar declines. First, a reminder about what optimal puts mean in this context and why I've used 20% as a decline threshold.

Optimal puts are the ones that will give you the level of protection you want at the lowest possible cost. As University of Maine finance professor Dr. Robert Strong, CFA has noted, picking the most economical puts can be a complicated task. With Portfolio Armor (available in Seeking Alpha's Investing Tools Store and as an Apple iOS app), you just enter the symbol of the stock or ETF you're looking to hedge, the number of shares you own and the maximum decline you're willing to risk (your threshold). Then the app uses an algorithm developed by a finance academic to sort through and analyze all of the available puts for your position, scanning for the optimal ones.

Hedging Costs as of Monday's close

The data in the table below is as of Monday's close. After the three ETFs listed for comparison purposes, the NYSE stocks are listed in order of their share volume in Monday's trading, with the most actively traded stock (BAC) listed first; the Nasdaq stocks are listed in a similar order, with the most actively traded Nasda stock (MSFT) listed first.

I have a working theory that when we are born, each of us is assigned a special frequency code that tells us when to speak and when not to speak. I might be code A, you might be code B, another person might be code C, and so on. There is no superiority of inferiority to these codes; they are simply mutually exclusive and largely unique, and they allow us to have conversations with others without interruption.

99% of the time, this brilliant design lets two people converse in much the same way as a tennis match is held. I speak, then you speak, then I speak – – we volley words back and forth, sometimes weaving in and out of each other's sentences, but never with the uncomfortable awkwardness of stomping on what the other person is saying. A cocktail gathering of six people standing in a circle operates in much the same way, and it goes off without a hitch in spite of the mild inebriation of all participants.

There are occasions, however, when I talk to someone who has been given the same frequency code as me. And that means they start talking exactly when I start to talk. Then we both stop. Then we both start again. Then we both stop again. It gets to the point where I feel the need to find a conch shell on the beach so that the two of us can hand the conch back and forth, giving us the privilege to speak only when said conch is held in a given person's hand.

Since a conch typically isn't handy, I grasp for my second urge, which is to pummel the individual in question. It's not their fault, of course. They just got the same code as I did. Perhaps I'm the only person irked by this, but I can sense some of you nodding their heads right now, so I guess I'm not alone after all.

Well, the market's tendency on a daily basis to go up, then down, then up, then down, (et cetera) still seems firmly intact. The big kahuma issue, of course, is what the gargantuan economic behometh called Greece decides to do about its austerity measures. Because, God knows, if they pass austerity measures that are meant to be in place for years to come, they will follow them to the letter and nothing at all will change.

This looming – and ridiculous – issue continues to hang over our heads, and thus I remain fairly light. I came into the day with one large long – FXE – and I added to it early in the day. I exited at a nice profit, and although I may be missing that long in a day or two, I'd really rather not gamble on what the Euro is going to do next. I am, instead, in a large quantity of small short positions, none of which are ETFs, and none of which are more than about 1% of the entire portfolio. I also have over 40% in plain old cash.

Of course, ZH is rampant with speculation about all the what if's and what-might-comes once parliament votes, but I'd rather just wait until this whole thing blows over. I will note, however, that the IWM chart below either represents a fantastic shorting opportunity (one in which, for reasons herein cited, I will not be pursuing) or a nasty bear trap. I think the downside opportunity is larger than the upside risk, but I really think I'll just stand aside here.

I read with great interest that the average return amongst hedge funds thus far this year is something like 1%. It just goes to show how, even with a ton of intellectual firepower and resources, some of the best traders in the business are having trouble wrenching even nickels and dimes out of this psychotic market. There is so much abnormality going on – – what with Greece, the debt ceiling, the end of QE2, the prospects of QE3, and any other black swan you care to imagine – – that the simple act of focusing on companies and their earnings seems positively quaint.

Just a comment cleaner, folks. As I said yesterday, get used to a "mellow, mostly-comments" Slope this week.

Oh, and good luck/God help us on this whole Greek vote thing. I never in my life thought I'd care about what the Greek parliament did with itself, but this week, I certainly do.

I mentioned that the stats for last week on the Dow were really bad on Monday last week and sure enough the Dow closed down after that wild week of reversals. We may have seen a low now but my confidence in that is low as other equity-related markets are visibly crumbling. Oil had already broken support and silver broke support too on Friday. Here that is on the SLV daily chart: 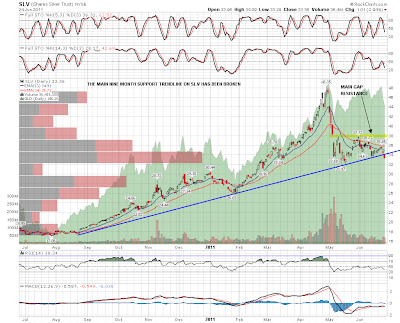 UUP pinocchioed through falling wedge resistance again on Friday, adding to the impression that USD is about to break up seriously: 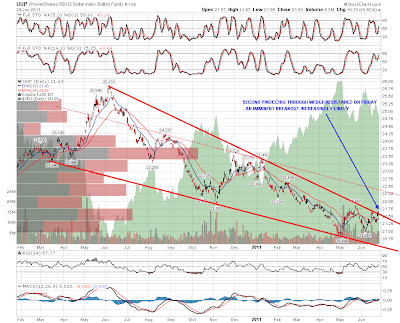 Short term though, EURUSD broke up from a falling wedge this morning with  target at 1.43.

So where now with equities? The situation is ambiguous here to say the least and that ambiguity is perhaps best expressed in my SPX 60min chart, where you can see a decent quality declining channel, the neckline of a possible large H&S, and a falling wedge (that may have developed into the declining channel) where the move down on Friday retested the broken wedge resistance trendline. The most obvious direction from here is still up I think, and a break above declining channel resistance in the 1290 SPX area would confirm that, but a break of support in the 1258 area would indicate down to the 1240s level for declining channel support: 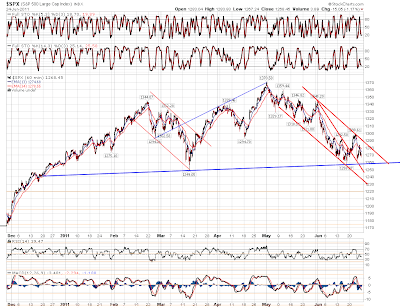 There was some decent positive divergence on ES and NQ at the overnight lows. Together with the EURUSD bounce that might well deliver a decent bounce on equities today. I have a possible rising channel developing on NQ which I'll be watching with interest today. I've pretty much written off the IHS as the last low went lower than the right shoulder:

There was no positive divergence needed on TF as there was no test of the last low. NQ was weakest and went lower than the last low, ES tested it exactly and TF bottomed well above. The rectangle on TF could potentially still play out, though there's some declining resistance in the 804.2 area:

I don't think we're down with downside yet, and if we see a strong bounce here then I would see that as a counter-trend bounce. I'm losing conviction that we'll see that strong bounce and if UUP breaks up then I suspect that we won't. MasterTheGap are suggesting that there are good odds to closing any opening gap today.