On Bloomberg TV Monday afternoon, markets reporter Adam Johnson noted that put protection had gotten more expensive since a week ago. That has been the case, as the the Chicago Board Options Exchange Market Volatility Index (VIX) has been above 20 since late last week. You can see examples of put protection getting more expensive in the table below, shows the costs, as of Monday afternoon, of hedging 20 of the most actively-traded stocks against greater-than-20% declines over the next several months, using the optimal puts for that.

For comparison purposes, I've also added the costs of hedging the SPDR S&P 500 Trust ETF (SPY), the SPDR Dow Jones Industrial Average ETF (DIA) and the Nasdaq 100-tracking ETF PowerShares QQQ Trust ETF (QQQ) against the similar declines. First, a reminder about what optimal puts mean in this context and why I've used 20% as a decline threshold.

Optimal puts are the ones that will give you the level of protection you want at the lowest possible cost. As University of Maine finance professor Dr. Robert Strong, CFA has noted, picking the most economical puts can be a complicated task. With Portfolio Armor (available on the web and as an Apple iOS app), you just enter the symbol of the stock or ETF you're looking to hedge, the number of shares you own and the maximum decline you're willing to risk (your threshold). Then the app uses an algorithm developed by a finance academic to sort through and analyze all of the available puts for your position, scanning for the optimal ones.

Hedging Costs as of Intraday Monday

The data in the table below is as of Monday afternoon.

I have, in my portfolio, done a couple of things:

(a) lightened up considerably, so that I've over half in cash right now;

I usually hate the term "oversold", but having looked at a lot of individual stock charts, we really, really need a bounce right now. It doesn't have to push us to new highs; but a hearty bounce of about 5% (again, depending on the index) would make a long list of individual stocks deliciously attractive.

Here's roughly what I see in the next few weeks on some big indexes:

I profited from the May/June tumble in equities, but not nearly to the extent that I would have hoped. Should we get the kind of robust push higher that I'm anticipating, I intend to get very aggressive on the short side for what I feel could be the best bearish opportunity in 2011.

As I mentioned last week the low last week, if that was a major low, wasn't a great low for bulls as it left decent looking H&S patterns forming on SPX, NDX and RUT. Here's how that would look on SPX: 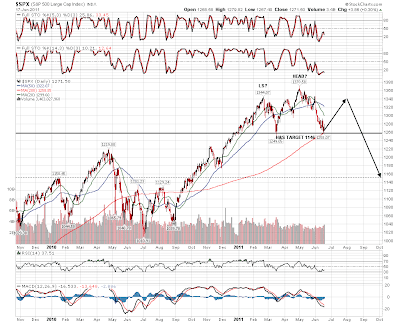 There's definitely unfinished business below, and a move up directly from here would suggest strongly to me that we'd see a move back to test these levels again later in the summer. Looking at ES on Friday and overnight though, there is still a strong possibility that we could see a better low made now. The trading stats for this week are grim, with (from my Stock Trader's Almanac) Dow down the last eleven trading weeks after June opex and down 18 of the last 20, with an average loss of 1.2%. It wouldn't take a lot to reach the support trendline on SPX from here: 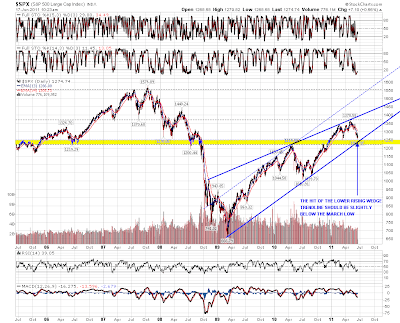 Vix closed back within the daily bollinger bands last week, and another red candle on Vix today would confirm a Vix buy signal for equities. The reliability on these signals isn't bad at all and that's something to watch today: 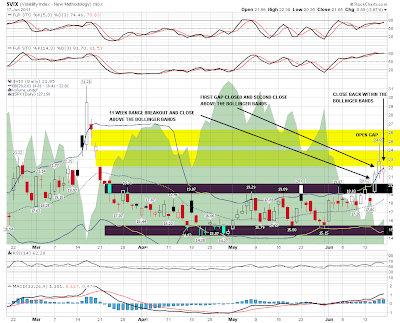 EURUSD has peaked slightly short of my Friday morning target (so far) and if we see an hourly close below 1.42 I'd be looking for a new low. The big news on EURUSD is the Greek vote of confidence in the government today. I think the government may well fall and that could make for an interesting week on many fronts:

The last 90s support level on oil I was talking about on Friday morning held on Friday but failed overnight. That clears the path for oil to retrace to the mid-80s and looks bearish for equities too:

I have an additional chart to post today on top of my own and that is a great chart from Gann360, who many of you will remember from a while ago at slope posting as Joe8888. Gann360 is his twitter handle and I originally joined twitter just to follow him, as his charting is superb and always well worth keeping an eye on. 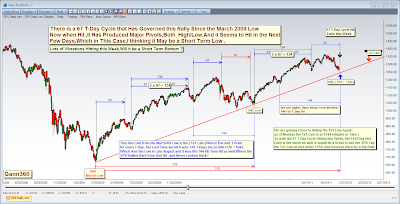 All in all I'm leaning bearish here, but the key indicator that I'm watching today is the Vix. A confirmed Vix buy signal today would definitely be bullish.

Most of you have probably had the uncomfortable experience of being asked to participate in the YMCA dance. You know the one, right? It's the "dance" in which the ancient song "YMCA" by the Village People is played, and people all jump around, trying to form the individual letters as they are sung by the group.

I suppose it's popular because it's really easy to do – – even four year old kids do a respectable job of forming the letters (and – hey – maybe for them it's even educational). But I would think for most adults – certainly most Slopers – the entire thing is embarassing. And, beyond that, the repetition of the song gets old really fast. To say nothing of the fact that, unbeknowst to a lot of the people hopping around forming letters, the entire premise of the song is picking up strangers for casual sex. No thanks. I'll just order another drink.