I have switched over to the 60min contracts on ES, NQ and TF this morning.

We saw the strong move up I was expecting yesterday morning, and it was strong enough to push the 60min RSIs on ES, NQ & TF into overbought territory. What happens now is very important for setting the direction for the next few days. ES fell slightly short of my 1294/5 target (on June ES), and may nonetheless be forming an IHS with a slightly downsloping neckline. There is another possibility though and that is that ES is still forming a broadening descending wedge with the next downside target in the 1245-50 area, which would take ES the ideal bottoming zone for this latest move down. The key trendline is the upper trendline of the wedge / the IHS neckline. A break above would target 1324 (from the IHS), and a move above 1311.80 on SPX should signal that the major low is in:

There's not much to see on NQ apart from yesterday's broken declining channel, which was retested nicely before the move up during market hours yesterday. There is another possible sloping IHS on NQ but it isn't worth marking up yet. NQ is still underperforming ES considerably which looks bearish:

TF moved almost exactly to the target I gave yesterday morning and there is therefore an IHS with a horizontal neckline that may be forming there. The target would be 816 on a break up, and TF was the strongest of the three indices yesterday and overnight:

I saw a very nice little rising channel on EURUSD yesterday and posted it on twitter in the afternoon. It broke down overnight and EURUSD is now reaching two key support levels. The first support level at 1.343 has already broken since I capped the chart below and EURUSD has reached the second key support level at the H&S neckline at 1.43. There is now therefore a fully formed H&S on EURUSD that indicates to 1.39 on a conviction break of 1.43. That is a very important level to watch today and a break down would also look bearish for equities:

Copper moved up with some conviction yesterday and has now reached a very important resistance zone. Firstly it is again retesting the broken rising wedge lower trendline, and if it breaks up through it with any conviction then that bearish setup is a writeoff. Secondly and less importantly I have a declining channel on HG with resistance at 417.60, and for both of these reasons I would regard an hourly close over that level as an important break up. Short term however the current level looks like a double-top with negative RSI divergence and I'm leaning short on copper today:

Silver is looking very interesting today. In the short term I have a declining channel on silver where the obvious next move is up to channel resistance in the 37.25-37.50 area:

That channel is not the interesting thing about silver at this level, but you can see the really interesting thing on the daily SLV chart, which shows another bounce off the ten month rising support trendline from just under 18. This is a very key trendline and it must really be broken for the deeper summer retracement on gold that I was talking about yesterday. I've also marked in the overhead gap resistance zone that must be broken if silver is to reverse back up strongly: 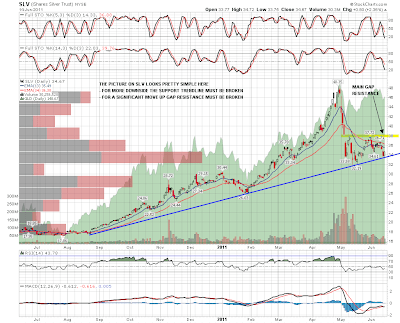 We haven't reached my SPX & NDX targets for the main interim low that I'm expecting, and I'm still expecting those to be hit.If we're going to reverse back down again then the obvious level to do that from is the highs yesterday. If those highs yesterday are exceeded, on ES and TF particularly, then that would look bullish and as I mentioned earlier, a break above 1311.80 SPX should signal that the low is in. Copper has reached the obvious point of failure here and a break above would look bullish. EURUSD has now fully formed the H&S we've been watching form all week and a neckline break with conviction would look bearish for everything else I've been looking at today. Overall I'm leaning short but expecting a bounce into the open today.