Below are 5-year Monthly charts for YM, ES, NQ & TF. All four e-mini futures indices closed in between their upper and middle Bollinger Bands on this timeframe. The YM and ES are in the thick of resistance, while the NQ has broken above, and the TF is approaching overhead resistance. Bollinger Bands are beginning to tighten slightly on YM, ES and NQ, suggesting a possible reversal of the advance at some point. Price has closed above the 5-year Volume Profile POC for all four e-minis. Volumes were lighter this month and have declined steadily since peaking in August of 2011. My very short-term RSI indicator is nearing overbought conditions for this timeframe. 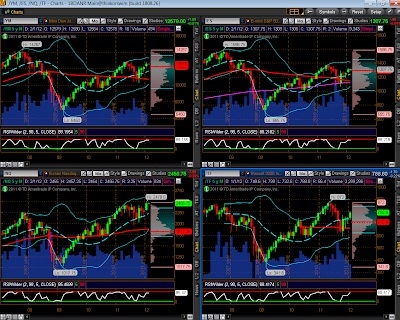 Below are 20-day 4-Hour charts for YM, ES, NQ & TF. We can see the steady rise in price from the beginning of January. The NQ & TF made a new swing high in pre-market trading today, while the YM & ES have made progressively lower swing highs over the past four days…none of them has made a new swing low yet. Today's initial drop from 9:00 am was made on considerably higher volumes on all four e-minis…whether this is the beginning of a bear pullback remains to be seen. Near-term support sits at the lower Bollinger Bands, followed by their respective next lower Fibonacci retracement level…that would be the 60% level for YM, 50% level for ES, and 38.2% for NQ & TF. My very short-term RSI indicator is nearing oversold conditions for this timeframe, but it is very sensitive to minor corrections and can be easily relieved by minor price corrections before a trend resumes. 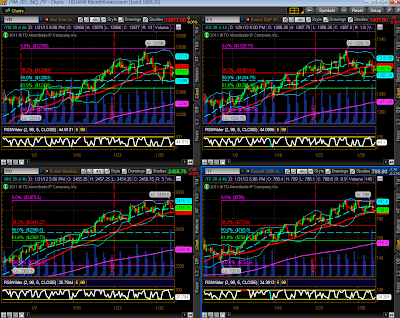 Question #1 from my post of January 30th has been answered, in part, as the ES closed above a moving average Golden Cross formation on the Daily chart…time will provide the answers to the rest of that question, as well as to the other two.

In the near term, we'll see whether the NQ and TF can continue a strong push up for February from here, with the YM and ES finding support to follow. Important sectors to watch in support of such an advance would be the High Dividend-paying Stocks ETF (DVY) and Emerging Markets ETF (EEM). As mentioned in my post of January 23rd, they are both facing a great deal of resistance at their current levels, and a push above would be at a considerable risk-to-reward ratio. In my opinion, we'd need to see higher volumes come in and stay on all these Indices and ETFs to confirm that a sustainable advance was viable in the face of such a high risk/reward scenario.