…as the bulls (secretly disguised as one thirsty NY bear) pushed the markets higher from their 2011 lows, while nearly fumbling and losing control of the ball several times, to score yet another higher weekly close.

Further to my posts of January 27th and January 28th, equity bulls' "sweet tooth for risk" got sweeter as shown on the following Weekly charts of YM, ES, NQ & TF. They succeeded in their mandate this week of boosting the ES higher and propping up YM, while continuing to buy NQ and TF.
The ES and TF have closed at Fibonacci Extension and channel "mean" confluence resistance, while YM is still below that same scenario, and the NQ is below Fibonacci Extension and upper channel confluence resistance (Technology is clearly the leader in this push up from December 2011).
Whether the ES and TF break above their respective resistance levels to continue a move upwards next week remains to be seen…indices to watch for hints of either continued strength or an onset of weakness. 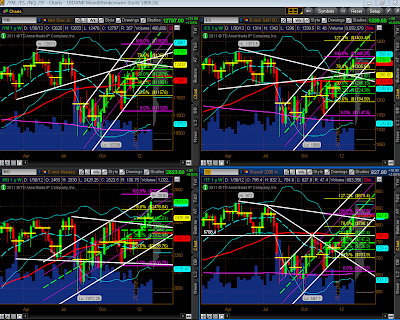 The charts and graphs below show where money flowed, firstly, from the beginning of 2012, and, secondly, during the course of this week. I've added JNK, the High Yield Corporate Bond ETF, to the equation since my January 27th post.

The first chart and graph show heavy buying of equities, Emerging Markets (EEM), Gold, and Copper during the course of January and into today's close, except for tepid buying in the High Dividend-Paying Stocks ETF (DVY) and the Corporate Bond ETF (JNK), and a pullback in Oil. 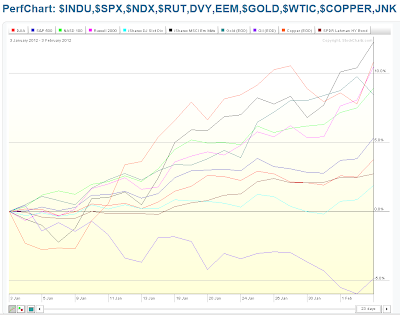 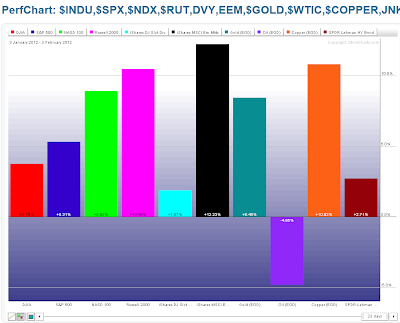 The last graph depicts buying/selling for this week. Proportionally, buying has continued to a similar degree as over the past month, except for a slight rise in DVY-buying, and except for a considerable drop in Gold-buying, as well as reduced buying in Copper and JNK, and a reduction in Oil-selling.
While risk-appetite seems to remain in force, it may be worthwhile keeping an eye on: 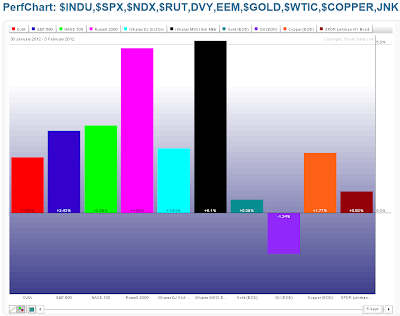 Finally, I'll leave you with this little tidbit concerning MF Global, which hasn't attracted much attention this week…will see where the money trail ends…
Enjoy the game…

https://slopeofhope.com/2012/02/close-fumbles-in-the-markets-1.html
Close Fumbles in the Markets