An Index that I'll be watching over the next couple of weeks is the NYSI (NYSE Summation Index) relative to its Stochastics. When the Stochastics cycle has peaked and crossed over on a Weekly timeframe, as shown on the chart below, and when NYSI reaches/approaches its weekly cycle high, this can be a signal that the S&P 500 Index is reversing or about to reverse.

For a live image of this chart, please click here. 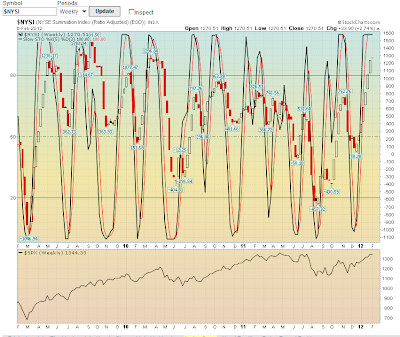 I didn't watch the Superbowl yesterday (are you kidding me? I was firing off my custom-made model rocket). I did hear about the guy in the toga, however. He's actually pretty awesome. I present to you – Sketchy Andy:

SPX broke decisively above declining resistance on Friday, which has eliminated one of the last bearish options on the table from the low in October. There are two main options remaining. The first is that SPX makes a double-top at the 2011 high. That is a very strong resistance level as it was also the base for the 2007 double-top. The second, which would fit with a retest of broken rising support from March 2009, would be a higher high as the end of wave 5 from that 2009 low. As wave 3 cannot be the shortest wave, that would have to finish below 1434.44. Above 1434.44 the path is clear to a retest of the 2007 highs.

Obviously there may well be no bearish resolution here, and given how far this current wave up has come since the December 19th low, any reversal in the near future may just be a retracement of this current move before new highs. With NDX at 11 year highs, and Dow beating the 2011 high on Friday, this is certainly looking pretty bullish at the moment: