Hey Slopers!  I want to show everyone what I'm seeing at this point.

At the end of last year I started watching this channel form.  The main broadening channel in blue and then the individual smaller channels and wedges in red. You can see as we began forming the main channel we created a wedge and sold off yet only to create a full channel. We also created a smaller channel while using  the former broken trend line as resistance.  We stayed in the smaller channel within the larger one for a couple weeks bumping up against that former resistance til we finally got a sell off going back down to the bottom of the main channel.

This post isn't really about making predictions but more of possible out comes in the coming week or so.

If you look at where we are now we've actually created another wedge. Within that wedge is a gorgeous looking broadening triangle which is a very volatile formation.  I'm not showing a chart of that because I'm trying to make this as simple and straight forward as possible and I think the main channel is my focus.

To continue I believe the chances of that wedge breaking down and forming another full channel within the bigger one is quite high.  It's possible we bust higher from here but I think it's healthier if we at least sell off to the projected trend line I've added.  I think the possibility exists that we are going to 1380 by the end of next week even if we get a 10 or 15 point sell-off in the next day or two.   We could see an ever biggerpull back all the way down to the bottom of the main blue channel but I favor the first scenario.

If we were to get any where near that projected target at or very near  the top main trend line I think the bears could get a nice swift swoosh to shake out the weak hands and reset the charts.   It feels strange being bullish on this blog but I have to call it like I see it. The weekly RSI on all the major indexes aren't even close to being overbought.   The trend is up in my opinion.  Trade accordingly!

I want to thank Tim and all the Slopers for making this blog a way of life.

EEM (Emerging Markets ETF) is on my "BOO-watch" radar as it approaches gap-resistance at 44.36 and forms the right shoulder of a very large H&S pattern, as shown on the Daily chart below. 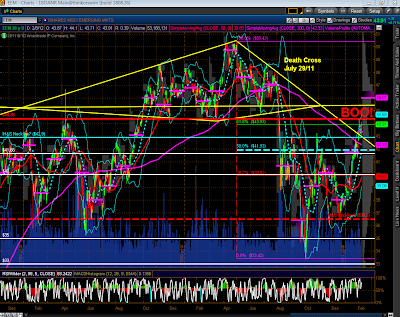 END_OF_DOCUMENT_TOKEN_TO_BE_REPLACED

We're on week 6 of a most impressive market rally, with yet even the slightest of market pullbacks. So what can one expect really, in the weeks ahead. First, let's take a look at market rallies dating back to 1963, nearly 50 years of market data using weekly chart data, to find out what rallies, on a consecutive positive week basis, were greater than what we are currently seeing.

END_OF_DOCUMENT_TOKEN_TO_BE_REPLACED

Cisco (CSCO) reports earnings after today's close. With that in mind, let's have a look at the comparative patterns (and my intermediate-term analytics) on some big-cap technology names.