Further to my post of February 11th, the YM, ES & NQ have advanced above the minor support levels that they had formed just before the latest unemployment data was released during pre-market hours on February 3rd. These e-mini futures indices rallied strongly (on high volumes normally seen during market hours, not during the pre-market session) immediately after that data was released before cash markets opened.

The TF also rallied on higher than normal pre-market volumes, but it has failed to advance above pre-market highs set that day.

As shown on the 4-Hour charts below, the uptrend remains intact for the YM, ES & NQ, while the TF is stuck in a trading range. The TF has re-tested the lows of this pre-market high-volume area five times now and rallied today, along with the YM, ES & NQ…all four e-minis rallied on increased volumes today. 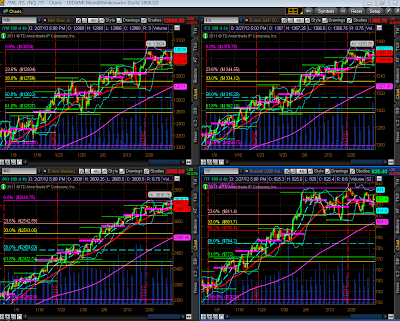 Below is a 1-Hour comparison chart of the Dow 30, S&P 500, Nasdaq 100, Russell 2000, Dow Transports, and Dow Utility Indices. It begins on February 3rd. As can be seen, the Nasdaq 100 is the leader in the rally from that date, with the Russell 2000 in negative territory, and Transports the laggard.

I'd look for any developing weakness in the Russell 2000, and a break and hold on the TF of its February 3rd pre-market high-volume level as a signal that the YM, ES & NQ may follow suit. Additionally, I'd look for a resumption of selling in Transports, as a confirmation (any further advance in Oil may have a negative impact on this index). Alternatively, a strengthening of the Russell 2000 and Transports should provide support for any further advance in the Dow 30, S&P 500, and Nasdaq 100 Indices. 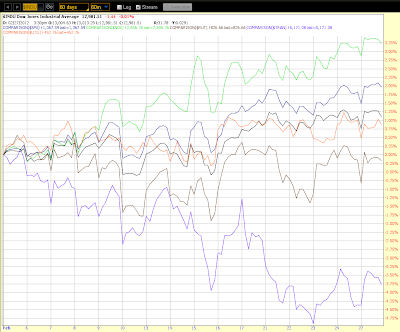