Well that was a very strong trend day up yesterday after the ES descending triangle broke up. The ES pattern target was reached near the trading hours close so that pattern is no longer in play. Somewhat to my surprise SPX closed an impressive 8 points over the upper bollinger band and that's bullish, in the sense that yesterday's high was unlikely to be a major high, and a higher high should be expected. 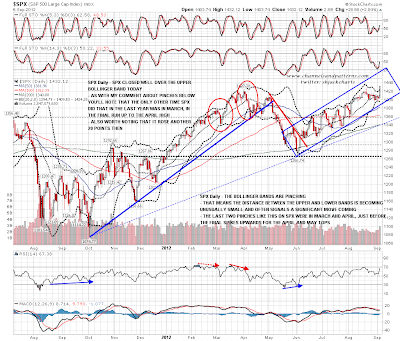 Looking back to the start of 2010, at daily BB pinches followed by closes outside the bollinger bands I found another seven. All were not far before significant highs and lows. Just sayin': 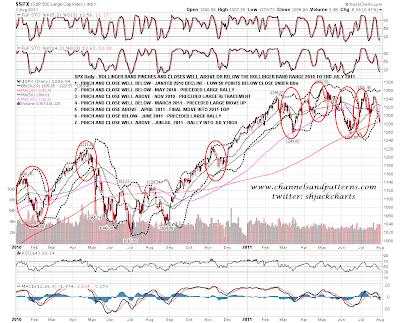 DX broke below the daily rising support trendline yesterday and is continuing down. The USD rally is most likely over. There is one more decent support level to break however, and that is rising channel support on the $USD (trading hours) chart. Some of you may recall that in June I was concerned that the failure to hit channel support then meant that USD would return to hit channel support before hitting channel resistance. This could still be that move and I have that support in the 80.6 area: 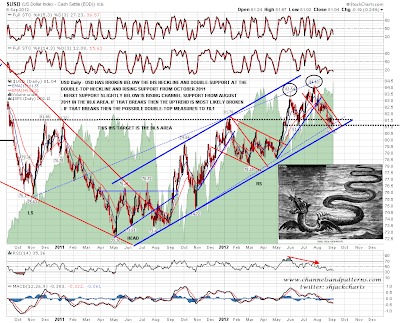 Obviously EURUSD has been within a bearish rising wedge since the July low, but that was weakened by EURUSD's failure to reach wedge support on the last downswing. EURUSD is now testing wedge resistance very hard and may break above. That might be a bearish wedge overthrow of course, but it may also be the rising wedge breaking up. Rising wedges break down 69% of the time, but of course that means that they break up 31% of the time. The descending triangle that broke up on ES yesterday was a 64% bearish pattern: 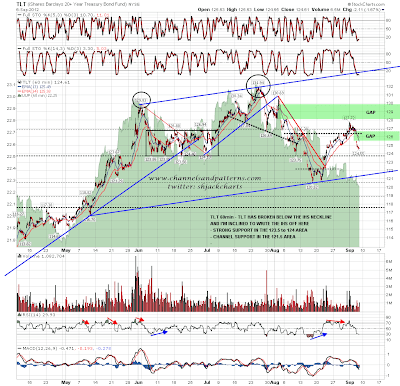 Oil had a wild day yesterday, making a short term higher high after the open and then plunging to make a marginally higher low in the afternoon. The overall setup still looks bearish but there is now a higher high and higher low in place so we may well see more upside. Ideally we would CL rally here to make a double-top in the 98.3 area:

Silver and gold are both showing some negative divergence on the 60min RSI now and if we're going to see a retracement then this should be the place to see that. I would be seeing any such retracement as a buying opportunity, and if we are seeing a major trend reversal on USD, then that would strongly confirm the major trend reversals we have been watching on precious metals. Here's the negative divergence on the SLV chart: 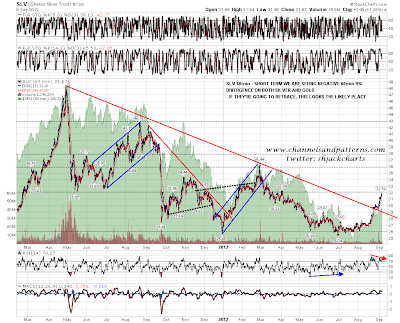 We are now approaching the key test of the major SPX pivot in the 1440 area. This is the very key bull/bear dividing line that I was looking at in my weekend post on the 19th of August. You can see that post here. If we reverse hard from the 1440-50 area then we might well be seeing the main 2012 top here, with a very bearish double-top between this peak and the one in April, and backed up by a mass of bear patterns on copper, EEM etc that I have posted before. If resistance there breaks then the main technical alternative is a run to the 2007 highs and a strong chance of a major top there in 2013.

I don't have any strong directional preference for today. I'm leaning slightly bearish because the trend day yesterday would normally be followed by a couple of days of retracement or consolidation. If we see some retracement the the top of the descending triangle in the 1418.5 area should be decent support and we may well retrace back into the 1423-8 area in order to close back with the daily bollinger band on SPX. The chances of a strong up day today look slim and the Gap Guy likes the odds for a gap fill today. So do I. I still have a heavy cold so I won't be around much today.