The main chart for today is the SPX 15min chart. Obviously the declining channel / flag I showed yesterday broke up overnight and a decent short term support trendline has been confirmed at yesterday's low. As I said yesterday morning, this suggests a test of the highs and within the current rising channel there is now room for a test of the 2012 high at 1474. If we see that then strong trendline resistance would be close above and most likely we would have negative divergence on the 60min RSI at that test: 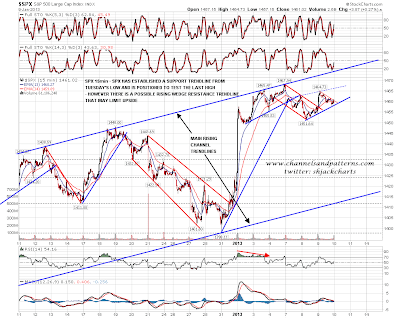 I didn't have time to have a good look at the SPX weekly chart yesterday so I'm showing that today. In the last seven years there have been fourteen hits of the upper bollinger band from the middle bollinger band, and six of those reversed there or shortly afterwards near that level to return to the middle bollinger band. Eight of them however did not, and were followed by trending moves that peaked at least three weeks later and at levels considerably higher. The question here is whether the rising channel  on the chart above holds. If it does then we should see a substantial retracement to retest the weekly middle bollinger band, currently in the 1425 area. If the rising channel breaks then we may see a major trending move that lasts several weeks more and goes a lot higher. The current trendline and pattern setup strongly favors the first option, and current sentiment and the BB history somewhat favors the second option: 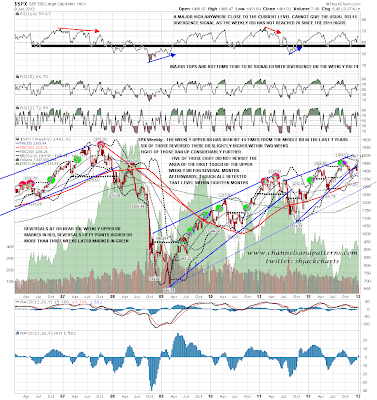 In terms of the pattern setup I've been posting the rising wedge setup on Dow but I've broadened that today to show the four rising wedges on Dow since the March 2009 low. This is an interesting chart and worth looking at carefully. As you can see the three previous wedges all finished with double-tops forming, and only one of those , the poor quality 2010 double-top, failed to make target. This pattern setup strongly suggests at least a return to test the November lows in the not too distant future: 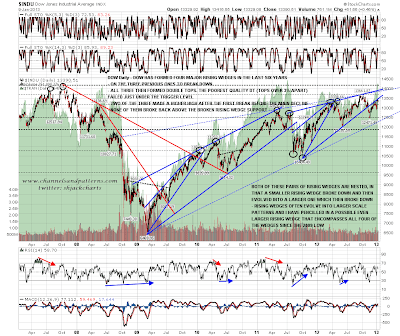 On other markets EURUSD made a double-bottom second low yesterday, then broke declining resistance before making the double-bottom target overnight. Since I capped this chart an hour or so ago, EURUSD has spiked up very strongly on comments from Draghi through the strong resistance zone at 1.315 to 1.317 that I mentioned on the chart. If that break holds today EURUSD could retest the 1.33 level soon, but the 60min RSI is now very overbought and I'm looking for at least some retracement soon to establish a less vertical support trend.line:

CL shrugged off the possible double-top yesterday and made the bottom of my 94.8 resistance level target area overnight. I'm looking for some retracement here, but as long as rising support in the 91.3 area holds, I have a higher target in the 96 to 96.5 area that may well be hit next:

We've seen a wild move up on EURUSD in the last few hours and that has carried ES up in sympathy to a new 2013 high. I have strong trendline resistance on SPX in the 1473-5 area and if this ES strength persists into trading hours I will be looking hard for signs of reversal there.

Only five charts today but the first three charts say everything about the position on equities here. I strongly recommend having a careful look at the SPX weekly and Dow charts to weigh the bearish pattern setup here. There is a huge amount of euphoria about QE Infinity here but against that we saw similar euphoria in early September when it was first announced, and that crumbled in the face of an imminent budget battle. While there is a lot of talk about platinum coins with huge face value and the constitutional protections for servicing existing US debt, it's worth remembering that there may well be another even more bruising budget battle next month.

https://slopeofhope.com/2013/01/a-lot-of-wedges-by-springheel-jack.html
A Lot of Wedges (by Springheel Jack)