An analysis of Amazon (AMZN)’s charts on Monday identified a near-term potentially bullish formation juxtaposed against a tricky, potentially dangerous intermediate-term set up.

From a near-term perspective, AMZN on its hourly chart appeared to be putting in a “falling wedge”-type pattern (the opposite of a rising wedge), which usually represents a trend-ending formation. In this case, it would be the conclusion of the correction off of the July 27 high at 1083.20 to Monday’s low at 942.25.

Often times, the end of the falling wedge will come in the form of one final down-spike beneath the lower wedge boundary line, into marginal new reaction low territory, say beneath 940, into the 936 area, followed by a vicious upside reversal spike and the initiation of a powerful rally that will propel AMZN above 953-960 resistance to confirm the turn.  From a near-term perspective then, AMZN should be getting ready for a tradable upmove. END_OF_DOCUMENT_TOKEN_TO_BE_REPLACED

Today can be summed up in one image: END_OF_DOCUMENT_TOKEN_TO_BE_REPLACED

The price of Gasoline RBOB Futures is coming to a head in this large triangle formation, as shown on the following Monthly chart.

Watch for a breakout and hold above its apex around the 1.6445 level, together with a new swing high on the Momentum indicator, to confirm sustainable bullish sentiment. 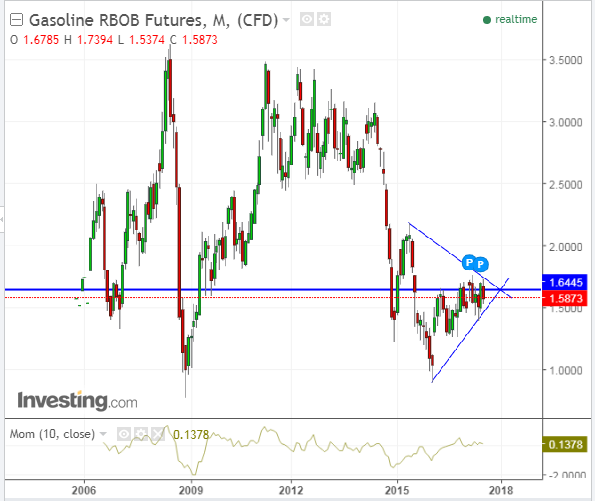 Even though the “end of the world selloff” ended almost instantly this morning, I’m having a good day. I’m up 1.8% on my regular portfolio and about 3% on my ETF portfolio, in spite of being completely short (the one exception being my NUGT long, which I closed promptly this morning). The SPY is key at this point, with the breakout level highlighted in cyan and the failure point (the one I’m rooting for……..) in yellow. McDonald’s Corporation (MCD) approaching all time high at 160 which if broken could accelerate prices toward 163 in the short term period.