The Headline reads "Ben Bernanke saved the global economy.  So why does everyone hate him?"

I don't know for sure why everyone hates him; he seems like a nice enough fellow.  But it could have something to do with the smug, myopic and academic surety with which he goes about his business of remotely managing an economy that should be allowed to purge itself of the excess leverage and unmanageable debt that has been systematically layered in over the years, enriching some and relatively impoverishing many.

It could be because people who care enough to see through the headlines know that he is systematically employing more of what already brought the system to this sorry state.  They hate him because he and his ego are reworking the Treasury market to paint a desired picture that all is well and good.  They hate him because being astute enough to extrapolate forward, they know that what he is doing paints things a certain way in the short term (for short term benefits to some) while hard wiring in future damage that would continue the progression – measured over years in the era of Inflation onDemand – of ever rising moral hazards.

I don't hate him, because that emotion is counter productive when it comes to managing this mess.  He is just the self-satisfied face of those entities that would seek to destroy me (and my big picture investment stance) if I were to allow that to happen.

Look at him… look into those eyes… look at the powerful monetary god casting his gaze upon you.  He cannot hurt you if you understand his modus operandi and his true mission, which is to inflate the banking system out of a black hole that was created by policy the likes of which is being employed today.  Feel sorry for him, because his mission really is an impossible one.

I continue to wonder whether he is an evil genius or an impossibly dull stooge (as compared to his predecessor) who actually believes his own b/s.  The US Treasury yield curves have been reworked by a powerful macro monetary manager.  The curves are now telling us that there are few concerns about inflation, thus the Fed is free to keep ZIRP on tap indefinitely.  We also see the economy revving up a bit… yet still no sign of a withdrawal of ZIRP.

What is this man afraid of?  Go ahead, let the economy fly of its own merit.  Go ahead genius, I dare you.

Cobra was saying at the weekend that the Dow is the leading index from a technical perspective at the moment. That may well be right. If so then the low on Friday at rising support from the October low looks particularly important, and it's obvious from the chart what will need to happen next if we are to see any more retracement this week. On a break below trendline and level support in the 13000 area the obvious next target is in the 12750 area. Without that break the main upward trend remains unbroken, and the next obvious upside target is in the 13400 area: 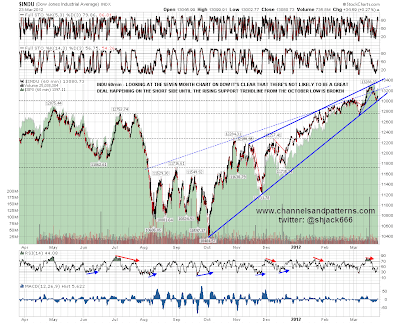