There are two shaded circles on each of the Weekly charts below of YM, ES, NQ & TF. The first contains the infamous "Fat Finger" day in 2010. The second contains the downdraft following Standard & Poor's downgrade of the U.S. credit rating in 2011. For all you wave traders, we may be approaching the final segment of a Wave 5 on the Weekly timeframe. It may be prudent to be prepared for sudden "Fat Finger" downdrafts, particularly if the TF is not able to break out and hold above 2011 highs. 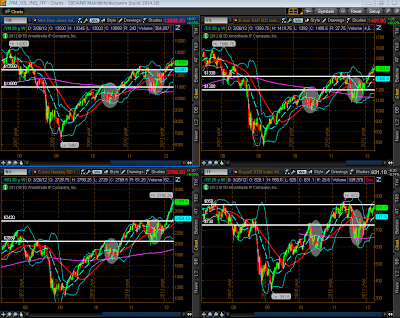 END_OF_DOCUMENT_TOKEN_TO_BE_REPLACED

Downward momentum may be becoming exhausted in natural gas, while oil prices have sold off hard but not enough to damage the overall bullish chart pattern. See charts below.

END_OF_DOCUMENT_TOKEN_TO_BE_REPLACED

See you all in the Fall, when bad ass Ben runs out of gas.