Last week, I noted to subscribers that we had to watch for a move up in the USO to give us indications that we have begun the wave iii to the upside. However, while the market did move up this past week, it did so with very subdued volume. Since we know that 3rd waves are very powerful waves and are moved by large volume, the fact that we did not see large volume on this last move up, and the waves seem to be overlapping, we have to assume that we may see one more decline in this market.

There is a pattern that I am able to discern in the USO that is indicating that it can return to the 38.35 level once again (an a=c projected decline). If one would choose to enter a long position in that region, I would suggest a stop at the 37.75 level (with the 37.85 level being the c=1.382*a level).

From a larger perspective, the manner in which this is now moving has me considering an alternative Ending Diagonal count to the upside in the USO. This pattern would have us bottoming in the USO within the next week or two, and then moving up to the 43.75 level. However, if the market does move up to that level, and is able to thereafter maintain support over the 42 level, then it brings back the 45 region into focus as the next higher target region in the USO. But once the market does begin to exhibit bullish tendencies once again, we will be able to better direct you regarding targets.

END_OF_DOCUMENT_TOKEN_TO_BE_REPLACED

I'll be watching these two charts (Monthly and Daily) on XHB in relation to New Home Sales data to be released on Tuesday (sales are still near 2009 lows, as shown on the graph below).

Immediate resistance is just above at a confluence of a 61.8% Fibonacci fanline, 50 dma, Monthly Volume Profile POC, Monthly VWAP, and the lower 1/3 level from the 2006 high to the 2009 low…price needs to clear and hold above 21.00 for a potential rally…otherwise, I'd look for more downside movement…looks like lots of volatility building here. 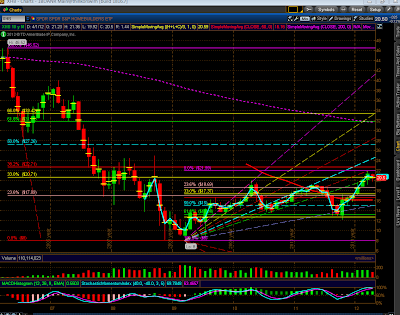