Firstly, I apologize for my lengthy post…but as I know you're such a nice group, perhaps you'll grant me this indulgence and bear with me!

Further to my last weekly market update, here is a summary of where money flow ended for Week 2 of April 2012.

The Weekly charts below of YM, ES, NQ & TF show that they all closed lower than the prior week, following last week's bearish engulfing candle. The ES has now joined the YM & TF in closing below its uptrending channel from the 2011 lows, while the NQ is still above the channel.

END_OF_DOCUMENT_TOKEN_TO_BE_REPLACED

I've been posting my main USD chart regularly this year, and have been describing it as my big picture chart, but it is only the big picture in the context of the much shorter term charts that I generally post. It is a 30 month daily chart, and for those of you not familiar with it the main points to note are:

2. The rising channel that has formed since the May 2012 low.

3. The possible IHS forming that would currently be more than halfway through the right shoulder.

4. The shorter term declining channel that has formed since the January 2012 high. That's worth noting as a break over it will most likely indicate that USD will have bottomed for 2012.

That is the immediate picture for USD and obviously, it looks bullish, with the caveat that USD has not yet hit the obvious rising channel support target, currently in the 78 area. It may not hit channel support however, and in any case, if the IHS completes and plays out, I would expect the rising channel to break upwards as that happened: 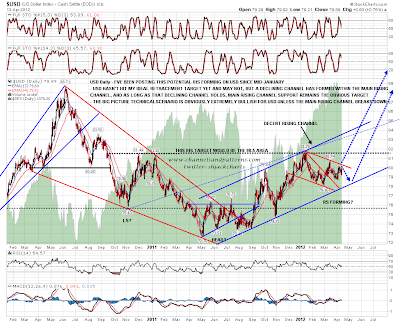