Looking at the Daily charts below of YM, ES, NQ & TF, I'd be looking for a continuation of Tuesday's advance and a hold above its high on any retest before I would assign a "bullish" rating to all four in the short term…so, very simply, I'd like to see price remain above the middle Bollinger Band on future upward price movement with the caveat that high volumes support such a move, particularly on any breakout and hold above April's highs. Otherwise, we may see further choppy sideways movement, or a deeper pullback until a new trend is established.

Inasmuch as the TF was unable to close near its high of the day, this e-mini futures index, especially, will need to attract heavier buying interest if it is going to present us with a convincing rally.

Additionally, I'm still mindful of my comments of April 13th with respect to the NQ…namely:
"The NQ's volume in the Volume Profile from February onwards is very thin, which signals a potential weakness/problem in this e-mini futures index being able to advance much further and hold above its 2011 highs. I wouldn't be surprised to see price drop back to this level at some point and further buying volumes finally enter to support a convincing rally…no doubt this would have a negative impact/drag on the other three indices." 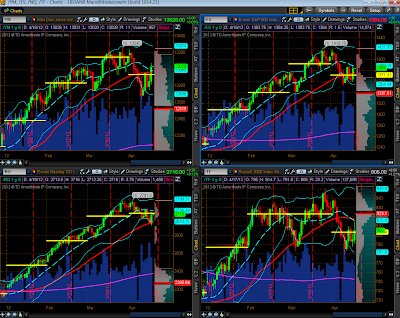 The 4-Hour charts below show that price has rallied to the 61.8% Fibonacci retracement level on the YM, and touched the 50% level on the ES, NQ & TF. A short-term bullish scenario as I've described above would put all four on track to potentially reach their 127.2% external Fibonacci retracement targets which I described in my post of April 12th by Options Expiry Friday, April 20th. Since these are pretty lofty targets, we'd need extreme bullish advances to occur over each of the next three days…we'll see what happens. 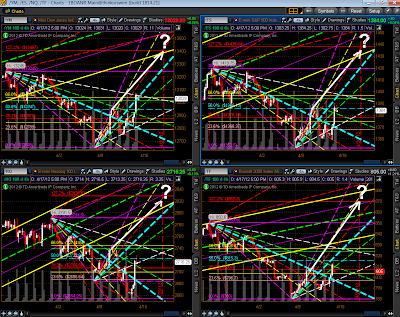 As an entrepreneur, the greatest compliment I ever received was from a number of my employees who, after I sold the company, told me that they would follow me anywhere if I decided to start something new.

It was really heartwarming, because it’s not like anybody got wildly rich in the process. My conclusion was that they really enjoyed the comraderie, the creativity, and the environment that I helped to create.

Well, although I’ve been involved in a lot of little things on my own after Prophet was sold, I haven’t started any other businesses. I am, however, starting a new project that I’m pretty excited about – – and which will mesh quite nicely with Slope of Hope – – but I’d like to get some of you to help me shape and test the product in its very earliest stages.

In the past, I’ve released products and features without any concern for privacy, but this time is different. If you are interested in being involved, you are going to have to sign a printed legal document and mail it to me if you’d like to be included. There’s nothing scary about it – – it’s a non-disclosure agreement which simply obliges you to keep quiet about the product and its features until such time as it’s released. It also states that if you come up with some clever feature, name, or other contribution during the course of testing that you’ll get nothing except some heartfelt appreciation on my part.

Once I get your agreement, I’ll drop you a line telling you what I’m up to. Thanks!

I've pointed out the above pattern a couple of times before, but it's one of the cleanest I've seen.

Diamonds can be great continuation patterns (witness Coca Cola symbol KO today!) and powerful reversal patterns. In this case, I think we've got a reversal at hand.

As can be seen on this S&P Sector Summary, the U.S. Financials sector finished in second place on Monday.

The Daily chartgrid below shows these sectors, along with the S&P 500 Index. As can be seen, price is trading around either the 50 sma (red) or the 200 sma (pink). 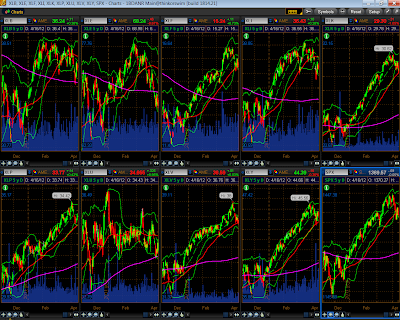