Long-time readers know I'm not a big fan of travel. I am notorious homebody. I like to be with my dog, my chickens, and my nine computer monitors. I like my chair. I like my 50 megabit connection to the Internet (plus two backups). I like my Peets 7-pump chai at my side. And so forth.

But family travel calls, and thus I am here in Virginia Beach. I am doing the best I can with three laptops and a lame-ass wireless Internet connection (whose speed, I kid you not, clocks in at barely half a megabit).

On top of it all, my famous Blogger's Guilt was in full force today, as I was on a cross-country plane trip without WiFi. (United Airlines is still catching up to 1970s technology). Thus, Slope of Hope was pretty lame today, although it still garnered very strong traffic. (Thanks, Iggy, for helping holding the fort down!)

END_OF_DOCUMENT_TOKEN_TO_BE_REPLACED

By way of NFTRH subscriber MetalAugmentor, a reputable and hard working mining stock fundamental research service to which I also subscribe, comes this thread talking about an entity called Turd Ferguson.

Turd is an offshoot of Zero Hedge, is apparently a really popular blogger among gold bugs and is cooking up plans to do battle with the 'cartel'.  'Silverax' also highlights Jim Sinclair and his own Golden Idea on how to break the cartel.  When I read something like "what we need is Maximus, the financial gladiator" I just cringe.

Gold is going where it is going, and it is anchoring value in a time of devaluation.  There is no need for war mentality.  There is only a need to keep perspective through ongoing events and the dynamic cycles in which they play out (I sound like an old fart, I know).

In short, there will be triumphant crowing from the gold 'community' right up until the next top and into an impending cycle of whining, crying and writhing in pain at which point what, the financial gladiator saves them all again?  Or maybe Turd and his hedge fund adviser buddy slay the cartel for good?

Why not save the emotional ups and downs, put that energy into day to day life and understand that we are going to get where we are going despite pathetic attempts at manipulation of the macro by the 'cartel'?

Gold is a tool that Central Banks, big financial institutions and various authorities use to temporarily manipulate the macro.  Most recently, the actual manipulation was performed on Treasury yield relationships, which in turn hurt gold, which in turn helped alter the macro ("And contrary-wise; what it is it wouldn't be, and what it wouldn't be it would.  You see?" –Alice).  It's just business, perverted and way out on a limb though it is.

Don't personalize it, or you risk becoming angry and biased.  Anger and bias promote wrong decisions.  The gold 'community', with its various leaders and caricatures is more like a cult than anything, and this hurts the 'community's' supposed effort to bring the monetary metal into the mainstream.

I will be traveling extensively today, and in the event that my plane doesn't have WiFi, this "open discussion" post is going to have to suffice for the rest of the day (I may put this up in advance of my flight, not knowing the WiFi situation, so – who knows – this post may be up only an hour or so).

Anyway, be strong, and talk amongst yourselves.

Further to my post of April 10th, there was a small overnight bounce today in YM, ES, NQ & TF, but no real advance during market hours, as shown on the 4-Hour charts below. Price remains below an immediate sharp downtrend line for now and is, therefore, still subject to further downside pressure until it's broken (with confidence) and held as new support (which is basically at today's high). 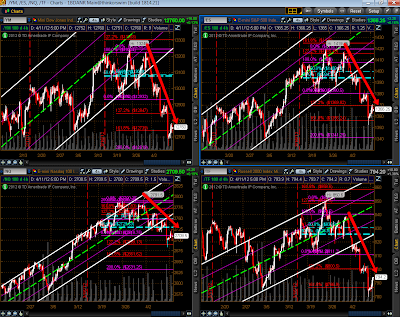