Below are Monthly, Weekly and Daily charts of the SPX. The following is my top-down analysis as of today's close.

Monthly Timeframe: Although price made a higher swing high this year over last year's high, the Stochastics, MACD, and RSI indicators did not…upside momentum is decreasing on the MACD histogram, and the RSI is hooking down. Bollinger Bands are tightening, suggesting a change in trend to the downside. Price is just below the top Bollinger Band, with the next level of support being the middle Bollinger Band at 1279. The 50 sma (red) is in danger of crossing below the 200 sma (pink) and is near the bottom Bollinger Band, forming the next major support level around 1150. 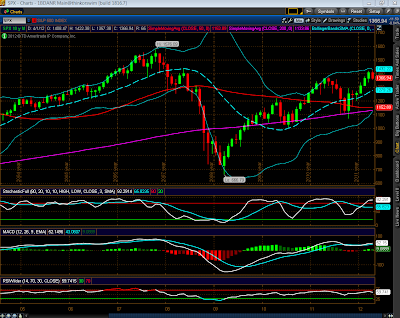 END_OF_DOCUMENT_TOKEN_TO_BE_REPLACED

The Eurozone situation is getting way past critical, and intensifying day by day.  It is now crystal clear to any one with half a brain, like myself, that direct bailouts to the Nation States of the periphery, and or LTRO cash injections to their faltering banks, can not, and will not solve the problem at hand. Mathematically, without additional GDP growth from the recession riddled EU countries of Italy, Spain, Greece, Portugal, Ireland, and which now include France the 2nd largest economy in the entire zone, there is near zero possibility of any of these additional funding rescue efforts to pan out.

Further bailouts are out, because they can not be paid back, and the Nations that have previously coughed up funds are themselves now running on empty, with growing difficulties of their own. Further LTRO cash infusions are not the answer either, as the funds are simply being transferred from the banksters to the Sovereigns in a circle jerk. The banks get free money, are told to buy up periphery bonds, and then pocket the unearned spread. Much like Timmay's home grown turbo TARP, the money simply never makes it into the main street economy at the ground level, which is imperative if you are interested in growth. In other words, without growth, these two rescue efforts are just like pissing in the wind, something I am intimately familiar with.

There are only two viable solutions available here. The first one is the outright dissolution of the Eurozone's monetary union, which would then free the Nation States to resolve their own fiscal affairs via a sovereign currency devaluation / increased competitiveness.  The 2nd is a 10% devaluation of the Euro itself throughout the entire existing zone. This would stimulate overall competitiveness of the EU, strengthening the core lenders of the zone, while at the same time giving the periphery economies some much needed relief by stimulating their exports.  Clearly, the last thing they need is to keep choking on an over valued currency, as they are beginning to cough up blood.

Option one, the dissolution of the monetary union is a logistical black whole nightmare, and will only be taken as a catastrophic last resort. That leaves only option two, a 10% devaluation of the EURO here and now.  To those of you who think that the US & Chinese CB will not allow it, think again. They permitted it for Japan after the Tsunami nuke implosion, and they will do it for Europe as well, which is experiencing a near melt down of its own.

The NWO globalists know damn well that it serves no one's interest to have the largest economic block on the planet fall off the face of the earth, which is what is happening as we speak. The time for patchwork liquidity solutions is over, this is a solvency crisis, and the only answer / solution to a solvency problem is internal growth, not more external  borrowing.  Furthermore, the much touted panacea of "austerity" is not a viable solution either.  Once again, you need growth to dig yourself out of solvency, and austerity does not provide growth, especially to european style economies with their significant & important public sector components.  And besides, the people won't accept it, last night's election results in France have made that quite clear.

Buckle up Slope-a-Dopes, option #2 is en route, a 10% devaluation of the EURO directly ahead.

In our comparison chart of the Spanish, German and U.S. 10-year Yield, we see that downward pressure on Bund yield persists, owing to a flight to safety from the Euro-zone periphery into German paper. Bund yield has violated a multi-month support area, which projects a target of 1.25%.

If U.S. Treasury yield breaks and sustains beneath support at 1.87%, the pattern argues for downside acceleration that should revisit the September 23 yield low at 1.68% on the way to 1.40% next.

My suspicion is that such a scenario will coincide with, and/or will be triggered by potentially acute weakness in U.S. and global equity indices.