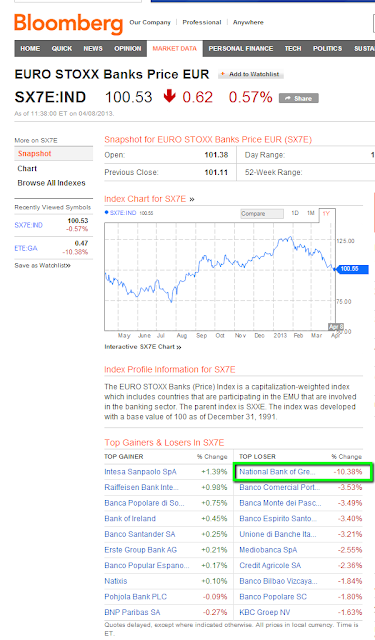 END_OF_DOCUMENT_TOKEN_TO_BE_REPLACED

Perhaps today’s (Monday’s) sideways movements, so far (as of 1:00 pm EST), are indicative of a market-in-waiting for Alcoa’s earnings release after the close.

However, in spite of its strong start in January of this year, it has lost all of its gains for the year, plus more, as shown on the 1-Year chart below…not such a great role model for the rest of the markets, in my humble opinion, as it’s still well below its 2008, 2010, and 2011 highs (and never even made it up to last year’s highs), as shown on the next 5-year chart. END_OF_DOCUMENT_TOKEN_TO_BE_REPLACED

Last Thursday, I took a strong liking to Johnson & Johnson (JNJ) based on its absolutely ridiculous hockey-stick rise. I bought puts as well as got short. The puts are up over 50% this morning, and unless shampoo suddenly makes people breakfast and drives their car for them, I really don’t see the logic is a cleaning products and shampoo maker garnering these kind of valuations. My positions stand. I have been watching this idea for a few days and waiting for a move higher to finish this potential larger WXY correction idea, this last leg up looks like a 5th wave of wave C, of a larger wave [Y]. Hence its what we Elliotticians call a WXY correction. From $3.25 i suspect its now in a small 5th wave of C, so as its pushed to a new high its met its minimum objection, although the [Y] = [W] target has been met as well.

If i am correct about this idea, and i don’t see any reason why atm, then we should be very close to a strong reversal and suspect this whole advance from the April 2012 lows gets completely retraced.

But even if the larger idea is wrong, there appears to be a 5 wave advance from $3.25 nearing a conclusion, if you look at the RSI it argues for a 5th wave much like the peak into the wave [W] peak back in Oct 2012. Ideally a small minor high for a small 5th wave then a strong move under $4.10 is want i want to see

I suspect there are many ways traders could take advantage of a potential reversal in this market, i personally prefer the futures market, although traders could look at options

I personally don’t know of any decent ETF, that really moves 1-1 with the price of NG, so i strongly suggest seeking out ways to trade this before you enter any trades