END_OF_DOCUMENT_TOKEN_TO_BE_REPLACED

Each candle shown on the following chart of the SPX represents One Year.

The first half of this year is depicted by a “doji,” as of the close on June 30th — spelling “indecision” by this equity market. So far, the close is a mere 4.21 points higher than its open on January 2nd…not much of a gain in six months…no surprise, since price has been held back by the 161.8% External Fibonacci Retracement level (taken from the last major swing high in 2007 to the 2009 low), which is a typical major Fibonacci profit-taking level. 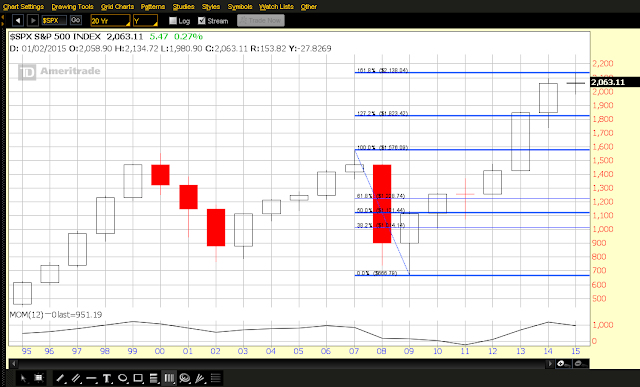 Each candle on this next chart of the SPX represents One Quarter of One Year. END_OF_DOCUMENT_TOKEN_TO_BE_REPLACED