I wanted to share something I found kind of fascinating.

Last night, I was thumbing through the videos I’ve posted on YouTube (there are hundreds). I sorted by popularity The most popular by far, with over 9 million views is – – of all things – – the Oompa Loompa song. However, one of my most popular chart-based videos I’ve ever done is this one, which was during the deepest depths of the market drop in 2011 (the last meaningful drop we’ve had in seven years). It’s incredible on a number of levels.

For one thing, as you can tell by my oh-so-mellow voice, I had been having a grand old time trading the downturn. However, I quite rightly expressed deep concern that – – and I’m trying to remember my exact words, but this is closing – – some “pandering politicians” would meddle in the market and set things right for the bulls again.

Oh, how right that was. Indeed, I made this video within HOURS – – yes, HOURS – – of the ultimate bottom, which I’ve highlighted here. It’s been straight fuckin’ up ever since. 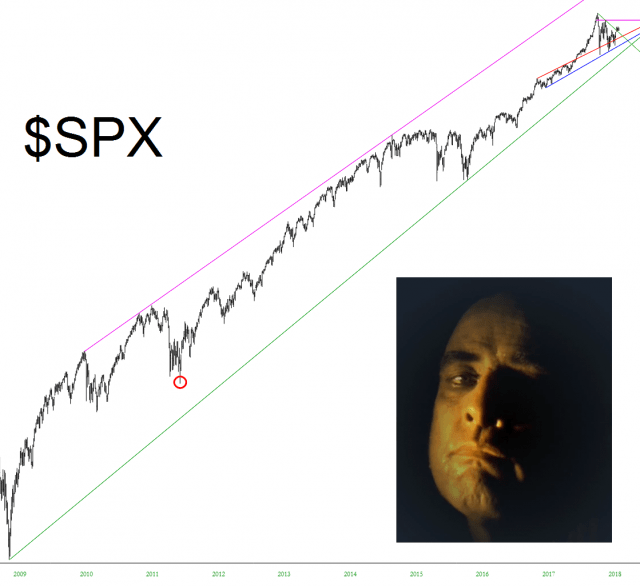 I also stated that bonds, which had been strong were about to push a little higher and reverse. They did that too.

As prescient as all this was, it’s clear to see a far better conclusion would have been: “Well, it’s been fun, but they aren’t going to tolerate this any longer, so buy everything you can with both hands and don’t look back for at least seven more years.” But, hey, in the heat of the moment, there was some wisdom buried in this video, and I was pretty proud to listen to this blast from the past.