Since early 2016 we have been carrying forward a theme illustrating that until the macro trends in place since 2011 change, the situation would be as is, stocks trending up and the precious metals in consolidation/correction. The current trends were kicked off symbolically, and functionally to a degree, by the Fed’s concoction of Operation Twist, a plan with the expressed goal of manipulating the macro (or in the Fed’s word, “sanitizing” inflation signals). Until this year it has been the gift that keeps on giving to unquestioningly bullish stock market participants.

We have also carried a theme forward that in order for a bull view to be widely recognized in gold, a bear view or at least a relative bear view will need to come about on the stock market, whether that means stocks rise nominally or not (ref. 2003-2007 when stocks rose nominally, but declined in terms of gold).

Gold does not move. It does not do much of anything other than mark its holders’ place, while the asset world goes in motion (up and down). Gold is a stable asset and its perceived value will diminish in the eyes of the average market participant during the risk ‘on’ good times, as instigated by the Bernanke and Yellen Fed and its perceived value will increase in line with a shift in other assets from risk ‘on’ to ‘off’.

Most recently we highlighted the following…

Gold and the Stock Market; It’s Not the Best of Both Worlds

In short, the general conditions of our handy Macrocosm graphic need to come into place.

As for the gold miners, the case is amplified because when gold’s ‘real’ price, as measured vs. cyclical commodities and stocks rises the miners gain in two ways:

There are many other considerations to gold’s fundamentals, like credit and interest rate spreads (including the yield curve) and gold’s status as measured against the average global currency, not just a select currency like the US dollar. For the sake of this post, take a quick checkup on some of the key indicators.

Gold vs. Stock Markets (SPX) has been stair stepping higher throughout 2018 so far. That is positive, although the major trend is still down. But change has to start somewhere. This is an example of how gold mining macro fundamentals would be aided by an inter-market relationship.

Gold vs. Commodities has been very weak in 2018, amid the inflationary resurgence as indicated by long-term yields and 10 year breakeven inflation rates. 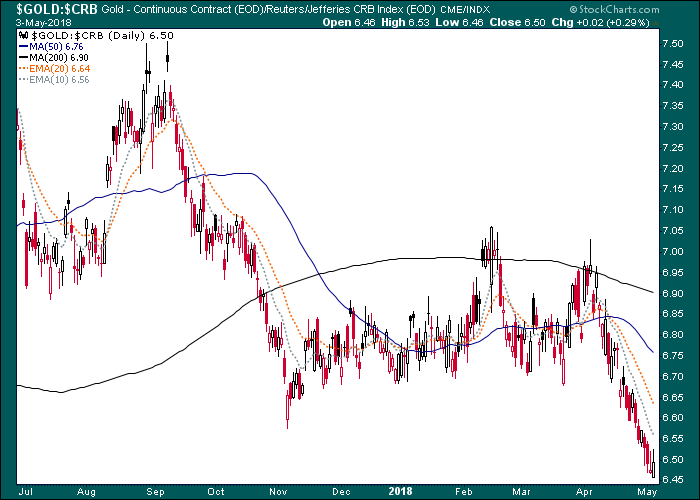 Gold vs. Oil is one direct example of why gold mining sector fundamentals would be impaired were gold to chronically under-perform commodities (Gold/CRB & Gold/Oil ratios are actually in consolidation of a long-term uptrend not visible by these charts).

As for the other large planet in the Macrocosm, the Employment report just released this morning shows a mixed picture and besides, it is a lagging indicator. Players should be watching early signals like gold’s relationship with cyclical metals (Gold/GYX is below and not yet positive), the highly cyclical Semiconductor Equipment (both Fab equipment and as we learned last week and included in NFTRH 497, Test equipment) segment and leadership indicators like Semi-to-Tech-to-SPX. 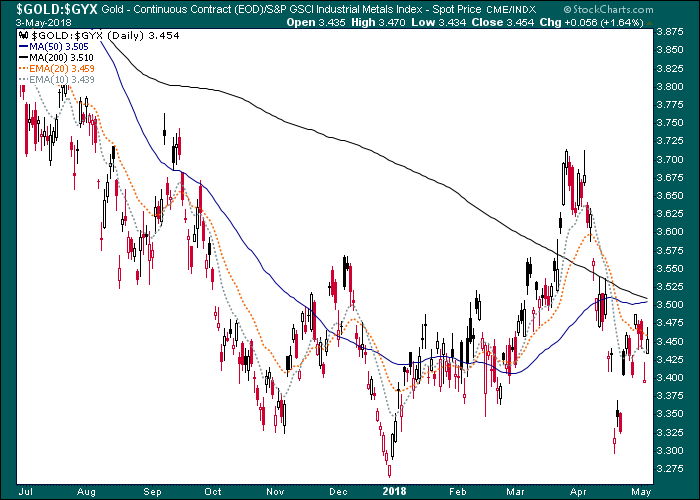 The bottom line is that the macro is shifting now but speaking personally and for NFTRH analysis, we are only managing a bounce to the next technical objective in the gold sector at this time. But when the macro indicators engage more fully we will prepare for a lock-and-load buy. That time is not here yet as we consolidate the 2016 up surge.

But the macro is moving along, slowly but surely. When it turns there will be distinct places to be positioned and others to be avoided (or shorted). The market is already getting much more interesting from a tactical standpoint as easy to follow trends are getting busted left and right. The comprehensive NFTRH service will be effectively managing the process every step of the way with detailed weekly reports and ever more dynamic in-week updates.