The Merriam-Webster dictionary defines a Baby Boomer as a member of the generation born between 1946 and 1964. If the average age of Baby Boomers is 65 years, then 1953 would be an important year for them. A lot of stuff happened that year, including the end of the Korean War.

At the age of 65, a person is also considered a senior citizen. With that “badge of honour” comes a whole host of pros and cons. Baby Boomers’ young adult lives were much more simple without distraction of home computers, cell phones and social media platforms. This kind of simple life meant that one could live in a more “linear-thinking” kind of mode, where people could more easily define their goals and create strategies and tactics on how they could be achieved at an early age, then work towards those as they aged.

The rapid onset of technology, nano-technology, nuclearization, globalization, pandemics, medical advances and cures, fluctuating climates, and mass human migration that we’ve seen emerge since the Sixties has brought with it a lot of rising challenges related to the adaption of social, economic, cultural, religious, racial and political differences and discord…as well as an oversaturation of information that’s been thrown at us on an ever-accelerating pace.

I’m not sure that the average human brain has kept pace with, and has a full grasp of, all that has occurred during those years and what it will mean for younger generations going forward.

No doubt, Baby Boomers have been and are in the process of retiring and downsizing their homes and possessions. Priorities have changed from work-related and family-raising activities, to ones more focused on health, pensions, friends, and comfort, as well as drawing down their investments for such purposes.

Younger generations are debt-ridden and information-overloaded. They will be saddled with the problems of yesterday, today and tomorrow at an ever-increasing pace and are required to think in a more “lateral” fashion…not an easy task, as they’ll need to keep an open mind and a keen eye open. Their disposable income may not be sufficient to plough into the stock markets.

We’re now living in that hand-off period between Baby Boomers and these younger people as they begin to step into those roles. What that transition period means for the markets is unknown at the moment…at least I don’t have a handle on that aspect (no crystal ball, darn it).

We may see a period of instability or chaos occur on a world-wide basis at some point where indecision becomes the norm for awhile, until new order and direction can evolve…one where markets stall and whipsaw for some time.

WHAT THAT MEANS FOR CURRENT EQUITY MARKETS

In the meantime, the technical indicators on the following monthly chart of the S&P 500 Index (SPX) can be monitored to gauge the strength or weakness of equities.

In this regard, my observations are:

These tell me that markets have reached a level of saturation and indecision…something I’ve written about in more detail all year in a variety of articles on a variety of markets. And, these technical indicators are additional tools to the ones I’ve mentioned that can be used to monitor equity strength/weakness/volatility going forward.

Whether this pause reflects, or is the beginning of, what I posited above regarding the generational hand-off is anybody’s guess…but it may be…keep an open mind, eyes open and think laterally.

As a Baby Boomer, myself, I intend to do just that, to the best of my abilities. 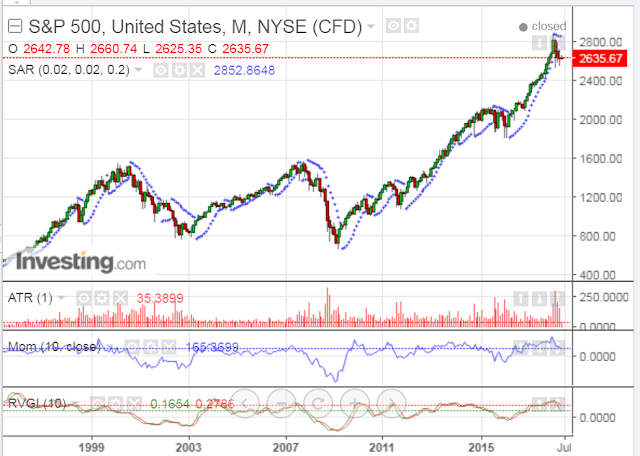