The image I have in my mind as I sit here now is an opening scene in the old television show Kung Fu, in which the monastery has hundreds of candles burning and flickering. Metaphorically speaking, each one of those candles represented, for me, hope that this incredibly highly-valued market would actually turn lower in a meaningful way. Indeed, early in February, it seemed that the few candles that were allowed to remain suddenly starting shooting three-foot flames toward the ceiling.

Sadly, I think there’s about one birthday cake-sized candle left, and the market has already unzipped its pants and is standing over it. Virtually every major index, as I’ve written with increasing despair lately, seems poised to rocket higher on another meaningful upleg. Volatility, the very essence of the sort of fear that is my stock in in trade, has been smothered in its crib for the whole of 2018, as it approaches single digit levels. 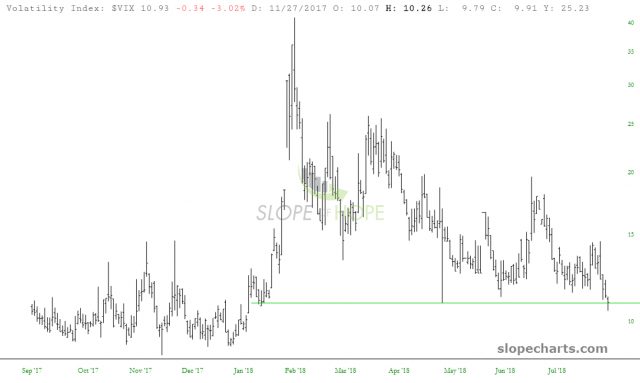 END_OF_DOCUMENT_TOKEN_TO_BE_REPLACED

The Emini S&P 500 (ES) continues to stair-step higher, reaching my next higher target of 2853/56, and now in route to 2868/72. However, if we view all of the action from mid-July to the Aug 2 test of key support at 2791 as a failed head & shoulders top formation, then the subsequent up-move from 2791.00, which has climbed above the levels of both Shoulders at 2822-2825, and above the peak of the Head at 2849.50, now has an upside “failed pattern” target of 2885.
In my decades of experience, when a head & shoulders top fails to break the neckline, and then reverses to the upside, its target is measured by adding the distance from the head to the neckline to the top of the right shoulder. In this particular case, we arrive at a major target in the vicinity of 2885. END_OF_DOCUMENT_TOKEN_TO_BE_REPLACED

I’ve mentioned this one as a short dozens of times here and on tastytrade; I’d say there’s plenty lower prices to come. 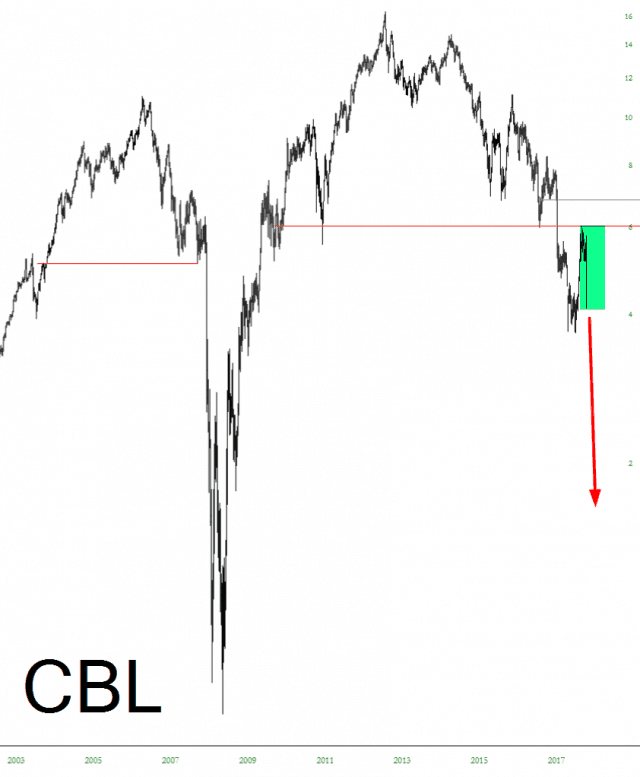 Most of you know I’m a big fan of good comedy. This video came up on my YouTube feed, and it struck me that 75% of the panelists are already dead. And they all died in their early 40s – Ralphie May at 45, Greg Giraldo at 44, and Patrick at 41. It’s incredible that a chubby, pot-smoking guy like Jeffrey Ross is the survivor among the four. But, sheesh, a 75% death rate – – combating the Taliban by yourself in Afghanistan probably has a higher survival percentage.