Time for an anecdote. Because some days deserve it. This one certainly does.

And by “day”, I don’t mean “Sunday” or “Monday.” I really mean the period between Sunday afternoon and Monday afternoon. That 24 hour block. Because there was a lot compressed into it.

To set the scene: I had spent the last several days in Kansas City, Missouri. As with virtually all my destinations, it was not particularly by choice, although the city does have a few charms of its own. During my time there, at which I was accompanied by my family, the firestorms in California were all over the news. The entire state was shrouded by a thick layer of unhealthy smoke.

One of my beloved children and I were slated to head back early, on Sunday evening, abandoning the rest of the family. My wife insisted that the aforementioned child stay away from the smoke, and she strongly encouraged, almost to the point of insistence, that I remain as well. However, I really wanted to get back home, smoke be damned. I wanted to get back to my computers, my screens, my dogs, and my super-high speed Internet. I would see the family soon enough.

As I waited at the airport, the GLOBEX market opened, and at first the ES and NQ went down. This was encouraging, since I was – as some of you know – heavily short with 99 positions. However, the market started climbing (I didn’t know it at the time, but the Chinese government, which is even more corrupt than our own, was again desperately bidding up their own fake market, which in turn causes GLOBEX to rise). The ES and NQ were soon up heartily, both in the double digits. I was pissed and worried. Added to which, there is a certain noxious permabull on Slope who was yammering on retarded projections about 3000+ on the S&P 500. Even though I shouldn’t pay any heed to idiots, it still rattles me.

On the flight home, I had WiFi, and I kept checking the ES and NQ, and they both stayed annoyingly green. A voice then came into my head: “The wind is at your back, and you refuse to believe it.” But as the tint shows below, I had to stomach the climb. 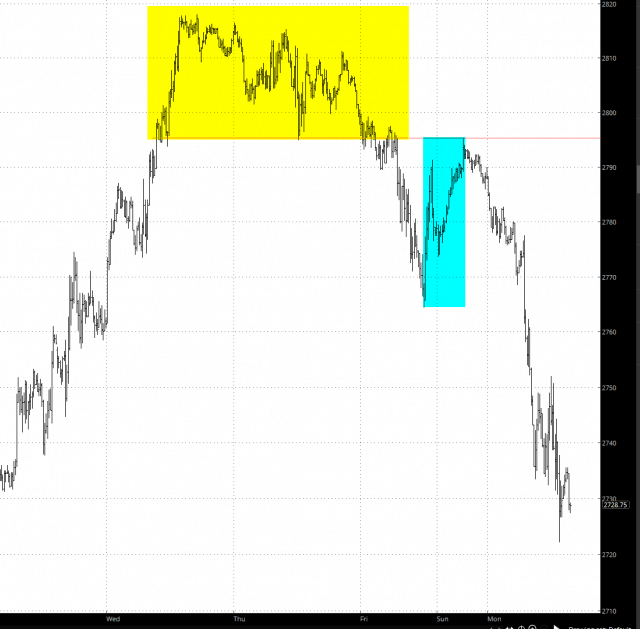 Take note of the yellow tint, however. As we were climbing and climbing, thanks to the morally bankrupt Chinese government, I said to myself: “What’s WRONG with you? Look at the pattern above it! The MOMENT it hits that wall of overhead supply, it’s going to turn tail!” And, As God Intended ™, that’s precisely what it did. It started to weaken. And weaken. And weaken some more. And then AAPL had bad news. And then GS had bad news. And then it really started falling.

And that’s what I woke up to. After a few hours of anxious sleep, I awoke to big fat red numbers on the screen, so I was looking forward to what would apparently be an exciting day. At about 5:30 in the morning, I got in the car to retrieve my dogs from their $250-per-night boarding facility (yeah, I know) and bring them home. I got home soon after the open, and I figured I’d tighten up stops and maybe enter a few new trades.

But something didn’t feel right. Slope seemed sluggish. Getting to the admin page seemed sticky and slow. I have a VERY strong innate sense as to when things “feel” wrong, and that feeling was there. And then………….

BANG. Everything stopped. After weeks of fantastic growth, huge numbers of new subscribers, and traffic growing every WEEK, the Slope of Hope suddenly didn’t exist. The site was down. And I was in deep shit.

I am not some kind of tech god, but I suspect I still am in about the 98th percentile or so with respect to high-tech knowledge in the world of Slopers. A few decades of experience with this crap under my belt comes in handy. And although it may sound weird, I find it oddly invigorating to have problems like this. Don’t get me wrong, I think it sucks to be down, and I hate that I had to be utterly distracted from the pleasure of trading and writing to instead focus on some VERY large scale troubleshooting. But I am, at heart, a problem solver. You think I’m a bear. Not really. I solve problems. I am The Wolf.

It took pretty much the entire trading day, but me and my boys focused utterly on:

And during this entire time, the market was going absolutely apeshit, and I wound up having one of the best trading days of the year. And, to top it off, one of my OTHER beloved children fenced so superbly that she at last earned her “A” rating, the highest possible, at the nationals tournament. So not only did I vanquish the disgusting bulls that dare contaminate my site with their very presence, but the Knight family prevailed in multiple dimensions.

Oh, and there was another victory. I had dropped off my Tesla Model S since the battery was having troubles. I came to pick the car up, and they had replaced the battery and presented me with a bill for $20,800. I guess the look on my face was enough. A few minutes later, they presented a bill for $0 and said it was due to “clerical error.” So whatever profit Tesla might have made on the original sale is long gone. These batteries are EXPENSIVE!

And, thus, Slope is secure and improved, and I am still not weary from an exceptionally straining day. As I said, it was oddly exhilarating. Yet as sorry as I am for any downtime – – for I know how dependent so many people are on Slope’s existence as a gathering place and a charting tool – – I feel better for having gone through it and survived.