I last wrote about the FAANGs and FNGU and what I was monitoring going forward in my post of July 30.

Since then, we’ve seen a great decline in the underlying stocks, as can be seen on the following two daily charts (a 1-year and a 2-month).

Of particular note, is that:

The following year-to-date percentages gained/lost graph of the FNGU stocks show that NFLX, TWTR and AMZN are still up the most, while BIDU, FB and BABA have lost the most in this timeframe.

The following one month percentages gained/lost graph of the FNGU stocks show that TSLA and TWTR have gained the most, while NVDA lost the most, and the others suffered considerable losses in this timeframe.

The following one week percentages gained/lost graph of the FNGU stocks show that NVDA, TWTR and TSLA have gained the most, while AAPL lost the most in this timeframe.

The following weekly chart of FNGU is showing a possible triple-bottom reversal in the making.

Both the momentum and rate-of-change indicators are well below their zero levels and, while the MOM is still dropping, the ROC is attempting to stabilize.

Last week’s closing price is below that of its open (52.17) when it first began trading back in January. 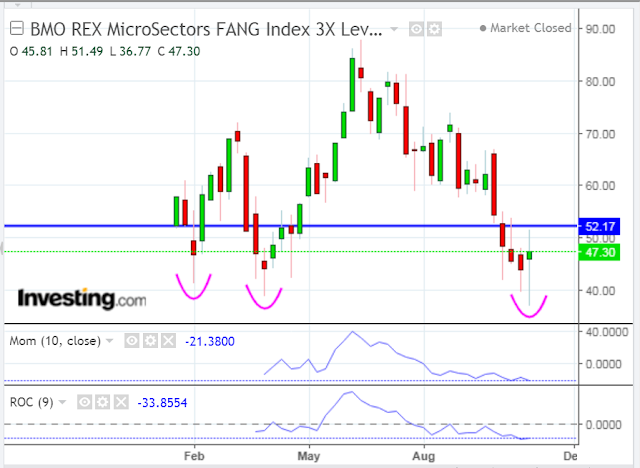 While the NDX has led the overall percentages gained year-to-date over the other U.S. major indices, it has lost the most on a one-month basis and has gained the least on a one-week basis, as shown on the following three graphs.

From the above observations, I’d suggest keeping an eye on the following going forward, particularly after the U.S. midterm elections on November 6:

https://slopeofhope.com/2018/11/will-the-faangs-lead-u-s-markets-up-or-down.html
Will The FAANGs Lead U.S. Markets Up or Down?
Best Pages
Memberships
SlopeCharts
SlopeMATRIX