It's been a while since I've stepped back and taken a look at the big picture of the markets, so I'll take this opportunity to do so. This will be my last post of the day, so I imagine there will be a gazillion comments by the time Springheel's post is up in the morning.

The market has been climbing mercilessly for twenty-two months now, and the surviving bears are, naturally, pretty despondent over the Fed's seemingly unlimited ability to levitate these markets. If you look at the very long-term charts, however, the rise makes sense in context, and there is hope for the bears after all.

The NASDAQ Composite is right near its 38.2% retracement level, which proved to be an important reversal point back during the 2007 top (in spite of a bit of an overshoot). In each of these examples, I've circled the interesting price points of the charts in red.

Looking at the Dow Industrials (which, believe it or don't, I'm still looking to hit under 6,000 before this is all over – – see the pink tinted circle) the retracements also seem to have plenty of power. We have well exceeded the level found last April, but as March 2009 proved, you can have some "overshoots" while, by and large, respecting these support and resistance levels. Take note of the many instances of this happening.

Here's an even longer-term view of the same index.

It's not often that Fibonacci Arcs are useful to me, but there are a few indexes in which they are. The S&P MidCap 400 is one of them. On the left side, you can see the fascinating behavior of the prices are they hug the curve. After the cruel rise of the past two years, this index is at last approaching the same arc.

Zoom in closer to get an appreciation for where we currently are.

There is no shortage of people, pundits, and publications that have made fools of themselves calling "the" top. I don't want to join that chorus, since an overpriced market can always become even more overpriced. But, for the seven bearish individuals still alive here on Earth, I can say the charts may be a source of solace.

Oil prices pivoted off of key support at 87.25-86.80 last Friday in the aftermath of a decline from 92.58. Strength yesterday and today has the look and feel of a new upleg, which if accurate projects next to 94.60-95.20 — and, if that target zone is breached, onwards to 103-105. At this juncture, only a sudden downside reversal that breaks 87.25 will disrupt higher projections.

The move has benefited the US Oil Fund ETF (USO), as well as Petroleo Brasileiro (PBR), which we've been following. The daily chart on PBR shows the recent pullback from the Jan 3 high at 38.25 to the Jan 10 low at 35.89, which has the right look of a completed correction. Given today's strength, the chart has the look of a new upleg that should take out the prior high at 38.25 en route to still higher near-term target zones.

Just a follow-up to yesterday's post: IGTE has fallen well over double-digits just since the post yesterday.

Generally speaking, I think interest rates are going to be heading higher. I therefore have large short positions in XLU and IEF. The latter is described as follows: "The investment seeks results that correspond generally to the price and yield performance, before fees and expenses, of the Barclays Capital U.S. 7-10 Year Treasury Bond Index. The fund generally invests at least 90% of assets in the bonds of the underlying index and at least 95% of assets in U.S. government."

My feeling is that the top is probably in on copper and precious metals. I'm much less convinced that the same is the case on equities. ES has broken up through declining resistance from the recent high this morning, and that is adding to my feeling that equities aren't done yet. I've been expecting a hit of the upper trendline of my ES rising wedge on the daily chart, and unless we see ES 1250 broken then I'm still expecting to see that. That target trendline is rising as we chop around here and if we were to hit it today it would be just under 1290 ES: 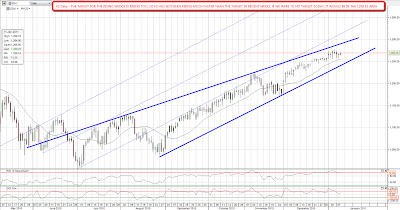 We are seeing signs that a top is near though. I haven't posted the gold:silver daily chart in a while as it has been in a steep decline since August, with the ratio dropping by a third in that time. There has been a very clear resistance trendline for that move though, and that trendline has now been broken. That suggests that a major interim top may well be near:

In terms of a commodities top the commodity currencies that I watch, mainly AUDUSD and CADUSD have remained strong while USD has been rallying. There are serious cracks appearing in AUDUSD now however, with the support trendline from June now breaking. If that is broken with confidence then I would expect AUDUSD to fall towards longer term support in the 90 area: 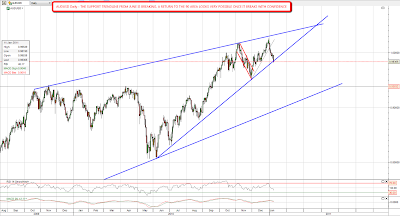 I'm watching the falling wedge on copper this morning to see whether it will hold today. It may well not, as the equivalent falling wedge on oil is already breaking up. I'm not expecting a new high on copper or oil, but they could yet broaden out into declining channels or make double tops. If it breaks up I'll be expecting a further move up of some kind while equities make a new high: 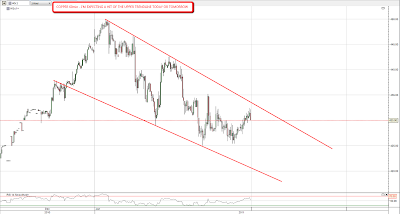 One chart that really struck me as interesting as I was going through charts this morning was the chart for the Baltic Dry Index. I've drawn a very nice fan on the $BDI chart and on a break up that would look very likely to lead to a significant further move up. The chart looks very weak though and BDI is still some 87.5% below the peak in 2008. That might be due to a glut in shipping ordered near the top of the last bubble but it is very interesting regardless that it has been quite so weak: 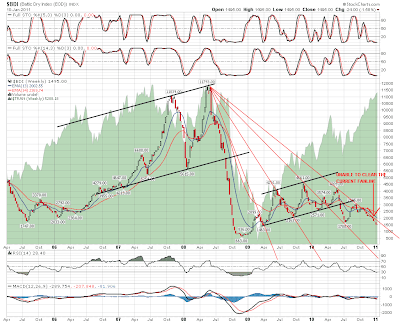 Sadly there is no BDI ETF. Does anyone know a decent way to trade the Baltic Dry Index?