GDP missed with a 3.2% read versus the estimates of 3.5%.  Looking purely at the highlights, two things stood out.  First, the drawdown in inventory for the first time in five quarters.  Inventory was a net drag on GDP by 3.70%.  The second and probably more eye catching stat was the Final Sales figure which showed a solid rise to 6.87% from a prior read of .94%.  So at the headline level although a miss, the report showed some positives.

Like anything though you need to read behind the headline to find the true story.  Without making GDP to confusing, let's break it down to the simple formula

The chart below shows how each component of GDP have changed over the past eight quarters.   The two areas that standout are the changes in (I) investment and (T) trade.  We did notice (G) government begin to turn down and become a net drag on GDP and we also saw (C) consumer tick up adding more to GDP growth. For the most part though (I) & (T) were the largest fluctuations.

The Trade component was a little confusing as it showed an increase in exports which makes sense considering the dollar debasement, but a substantial decrease in import growth by 2.40%.   The drawdown in inventories would be offset partially by the drawdown in imports but the amount was larger than would be expected considering the fact that the consumer showed strength this holiday.  GDP is quoted in real terms (inflation adjusted) from nominal values.  The BEA uses different price deflators in this adjustment and the deflator for imports is much larger than that of GDP as a whole (.3% for GDP and 21.8% for imports).  So part of this trade benefit to GDP was purely using an uneven price deflator that favored GDP versus imports.

The Investment component which is where inventory resides, showed the first drawdown in inventory levels in five quarters.  Odds are this is not a blip but rather a trend where inventory will continue to be a drag on GDP.  Until real demand comes back into the economy the desire to build GDP to higher levels will not be there.   So as inventory levels stagnate or reduce further based on sales, the (I) investment component of GDP should put more downward pressure on GDP.

The table below shows the past eight quarters and a breakdown of GDP by various components.

Another way of calculating GDP is using final sales and changes in inventory.

So on the surface GDP was a miss but looked OK.  Behind the headlines though questions do arise.  It's also important to note that this is the first of three more revisions to GDP.  For most of the report there are only two months of data (October and November) with December being more of an estimate.

This is a somewhat redundant post considering what a few have put up the past few days but it's worth staying focused on where we are right now versus where we were back in April right at the highs.  This post I wrote on Sunday night so ignore the comment on ES futures.  It's interesting to note that oil caught a bid today while equities caught yet another low volume bid.

The current market action is eerily similar to that of the April 2010 highs and subsequent correction. Granted Fed QE is still in operation unlike April, yet POMO is beginning to show less ability to move markets.  The key comparisons are as follows:

Personally, I think enough damage has been done from a technical standpoint, combined with questionable macro news (UK starting a new recession for example, US missing GDP on Friday, etc). I think many are not fully understanding what is happening in Egypt.  To me it's not an Egypt story.  No, I think it's a global revolution story.  People have been oppressed for years and have finally had enough. Bears may be emboldened again should the market attempt to move up.  It sets up a great trade with your stops at the prior highs should the market experience a move up the next few days.

The majority are expecting the market to move down on Monday, I would imagine and we know how that never works out.  Even with the Fed and POMO and a market that always seems to catch a bid, the risk reward here favors the short trade to purely cash trade in my opinion.  I remain short and hedged via credit call spreads but until a clear direction is shown, I won't be adding to my current position. 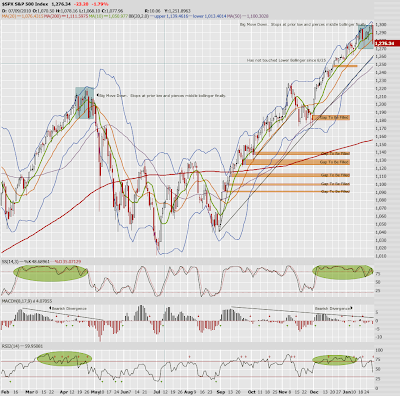 Submitted by Runedge.  If you want to follow my blog please visit - Ultra Trading

Abby Cohen is bullish on the market.

And down-days in equities are quickly snuffed out by the next session.

These are truisms in our lives. Still, I can't help but think this sort of thing got old a long time ago.

I have nothing additional to say about the markets right now. I'll do a post this evening. Any guest writers out there, please feel free to contribute.

……at least they have the same eye color on both sides of the face.