Sorry to Tim … I drafted this post Thursday pre-market by taking a quick copy/paste from my own blog from my site … the pictures didn't work so Tim could not post it.  I did a follow-up post after the market closed on Thursday so I will add that to the bottom of the original post.  I think it is worth the read so I hope you all enjoy it.

So was yesterday's action a warning shot across the bow, pointing to more weakness in the days ahead?  There were plenty of technical reasons why a pull-back in the equity markets was overdue.  I'm not going to go into those with this blog post … I wanted to talk more about what we should be looking for in the immediate few days ahead.

There is an old adage that tops are a rounded and bottoms can be "V" in shape (quick, strong thrusts).  If we are making a top in the equity market, the process should take several days before the real fireworks start.  If all we are doing is making a minor correction on the way to higher levels, we will again do that over several days.

I've gone over how to monitor a change in direction with earlier posts, so I won't re-hash that.  What I'm going to do with the rest of this blog is to try and look back at a recent period of topping action to give people a reminder of what the next few days could look like.

It is very rare to find any two periods in time to be identical, but they often will look alike.  So having that caveat out there, I would like to look more closely at the topping action from back in April 2010.

Now the action in April 2010 came at a different spot in the larger trend … just as an example of that, the April rally end came after only an impulsive move that was 54 days long.  The move off of the July lows on this thrust is already at 138 days.  QE2 has been very good for investors.

Enough with the PG movie warnings … how was April's topping action??

END_OF_DOCUMENT_TOKEN_TO_BE_REPLACED

Well, I had forgotten what these feels like, but it was a good week. The market seems to finally be fracturing, and more importantly, the items which should be experiencing bullish breakouts are rolling over limply. Here's to more of the same next week!

Oracle Corp. (ORCL), which has been up nearly 50% in less than six months, showed strength again Thursday despite the correction in Nasdaq. ORCL jumped 70 cents, or 2.23%, on one of the heaviest-volume sessions in the last couple of months and closed at 32.31, just 4 cents below the highest price since 2001.

I expect continuation of current momentum and a possible test of the upper trend line around 33.80 area in the next couple of trading days. Preferred entry (buy stop) price is at 32.55, with a stop loss at 31.65.

In my video a couple of days ago, I specifically called out Jones Apparel as one of my shorts, based on its massive head and shoulders pattern. Well, it looks like the pattern is starting to really kick into gear, as the stock is down double-digits this morning. There is almost nothing supporting the price at this point, and as outlandish as this might sound now, I'm targeting a low single-digit value for this one. 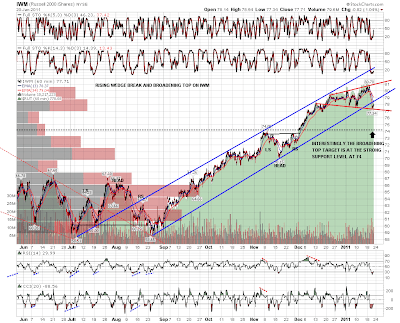 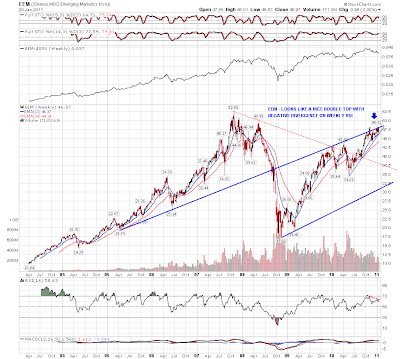