For this post I will only focus on the food problem for Egypt, and why it is a window on the demons released by our insane monetary printing, and the unwillingness of command and control countries to de-link from a parity dollar policy.  The FED is pumping dollars to force China, et al to revalue, allowing for us to export,  raise tax funds, and velocity through inflation.  Unsustainable food and oil prices will force the hands of these governments to do just that, is the thinking.  The game of chicken is on, but an unintended domino in a volatile part of the world fell this week, and has the potential to engulf us all.

Look at the slides and narrative from http://209.157.64.200/focus/f-news/2665495/posts?page=3.  You can plug in nearly every North African/Middle Eastern country into this picture, but China, Russia, and India are also in the same boat.  Add to this tight supply and the real likelihood that Russia, Canada, and Australia produce less than normal, and we have some big problems coming.

"Egypt is reported to be the world’s largest importer of wheat. In 2010, the oil minister stated that Egypt imports 40% of its food, and 60% of its wheat. The problem this year is that world wheat production is down (at least in part due to weather problems in Russia) so world exports are down: A longer term problem, though, is that world wheat production has not been growing to keep up with growing world population. Part of this lack of growth may be competition from biofuels. Part of the lack of growth also relates to the fact that the “green revolution” improvements (adding irrigation and fertilizer) are mostly behind us. While irrigation and fertilizer greatly improved production at the time of the change, gains in production since 1990 have been much smaller.

The cost of imported food, particularly wheat, has risen, partly because of the relatively smaller harvest, and partly because the cost of production and transport is rising because of rising oil prices. Figure 5 shows the close relationship food prices and oil prices. The Food Price Index used in this graph is the FAO’s Food Price Indexrelated to food for export; Brent oil prices are spot prices from the EIA. With oil prices higher now (because world production is close to flat, and as countries come out of recession, they want more), food prices of all types are higher as well. Oil is used directly in the production of grain and indirectly in storage and transit, so its cost becomes important.

The higher food prices contribute to the overall inflation problem that Egypt already had. In 2010, the CIA Factbook estimated the inflation rate to be 12.8%. Since wages don’t always rise to match inflation rates, inflationary pressures have no doubt put more pressure on the government to increase subsidies, at a time it cannot really afford to do so.

Impact on the Rest of the World

Why does everyone else respond so strongly to Egypt’s problems?

One reason is that other Arab countries are also feeling some of the same pressures. Food prices are rising everywhere. Many low income people spend in excess of 50% of their income for food, so a rise in food costs becomes a real issue. People have come to depend on oil and food subsidies. If they are taken away, or not raised sufficiently to compensate for the higher costs of imports, it is a real problem.

Oil prices seem to be affected as well. If the Suez Canal should be closed because of disruptions, it could affect oil transit, particularly to Europe. According to the EIA:

An estimated 1.0 million bbl/d of crude oil and refined petroleum products flowed northbound through the Suez Canal to the Mediterranean Sea in 2009, while 0.8 million bbl/d travelled southbound into the Red Sea.

The amounts being transported through the Suez canal are now likely down a little from these amounts in 2011, because of reduced imports/exports worldwide, but they are still substantial. Europe’s oil imports are about 10 million barrels a day of oil, according to Energy Export Data Browser (using BP’s data). If all of the amounts that flowed northbound went to Europe, they would amount to about 10% of Europe’s imports, or about 7% of Europe’s consumption. In fact, some of these exports go farther–in particular to the US, or to Canada, so the amount in question is probably lower than this relative to Europe’s consumption, say 4% or 5%. But even a small shortfall is a problem, in a world that needs oil for transport, food production, heating, and many other uses.

The inability to send products southbound through the Suez Canal is likely to also be a problem. Part of what Europe does is refine oil, keep the products it needs, and send other products to customers elsewhere. The whole system is set up assuming close to “just-in-time” production and delivery. While there is some storage capability, after a few days or weeks the system is likely to start running into problems. Those in need of the refined products being sent southward through the Suez Canal will be facing a shortage, and Europe will have excess supply. Of course, it is possible to use longer shipping routes, but this uses more oil for shipping and takes longer, so is more expensive. There is also a time-delay when the new system is put in place.

All of these problems (relating to both north and south-bound oil traveling through the Suez) can be worked around, but there could be a period of disruption for a while, as supplies begin traveling a longer route."

If you have not already, I suggest buying MOO, RJA, JJG, and DBA on any weakness.  The revolutions may end, but not the food crisis.

I was really struck by how many times XLU has bounced off its Fibonacci retracement levels. Based on the most recent touchpoint, I entered a medium-sized short position on XLU late last week.

Some interesting divergences with the SPX and the commercial positions on oil and copper in the most recent Commitment Of Traders report.  Leaving my bias out, looking purely at the charts, the SPX appears ready to finally correct.  So without any further commentary, here's what we have.  For those new to the COT report there are three categories of traders (1) Commercial – don't fade these people, (2) Non Commercial (3) Non Reporting – fade these people. 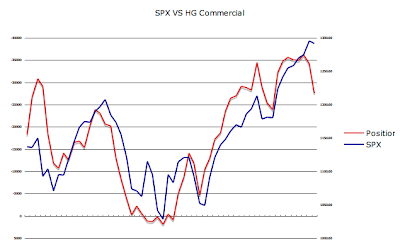 SPX versus Crude Commercial Net - the only "color" I will add here is notice how about six weeks ago the SPX popped above the position line when the prior sixty weeks it was below, all while the rate of change of the CL position has slowed. 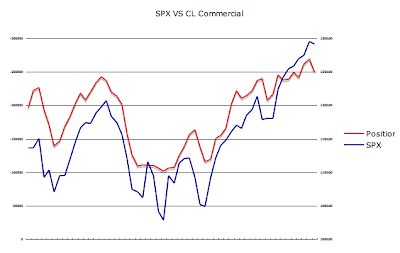 SPX versus Nymex Light Sweet Crude - This chart is as of 1/25 (Tuesday) before oil prices spiked with the protests in Egypt.  So if I were to draw the chart as of Friday 1/28 the divergence would be far less but "this time it's different."  This time the spike in oil is purely on fear and we know how fear is supposed to affect risk assets. 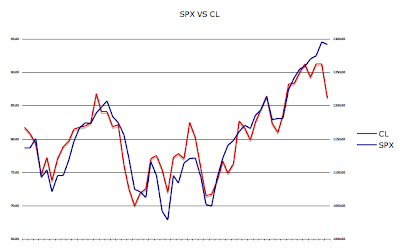 I have a proprietary trade signal which has correlated nicely with the SPX and also showing divergence. 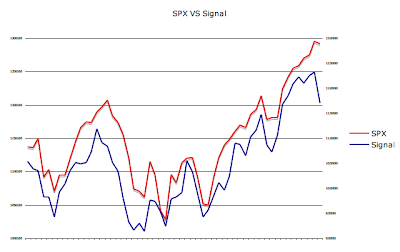