And, while it did bring bitcoin down hard, we’ve seen very little decline in ethereum. I had suggested in previous writings and on my Korelin Report discussions that we’ve seen some fledgling signs of decoupling in some alt coins from bitcoin movements since April. This is further evidence.

Not only did bitcoin break $7075 but plummeted a further 18% to $5770, while ethereum dropped only 14%. While this may seem like splitting hairs, this with the relative outperformance in ethereum since April is significant in my world. Ethereum is a higher beta asset than bitcoin. This means it normally moves farther in both directions. But not this time.

Also, when measured by Fibonacci extensions, it can still be said that ethereum may be holding on to a bullish, albeit tested setup. No chance in bitcoin. It is has already broken April and February lows. END_OF_DOCUMENT_TOKEN_TO_BE_REPLACED

The market has been getting batted back and forth like a cat’s toy, thanks to an administration that isn’t sticking to a consistent story. Trade war? No trade war? Is China our friend? Our enemy? I suspect this will all be sorted out by the time Mexico pays for that wall we’ve heard so much about. 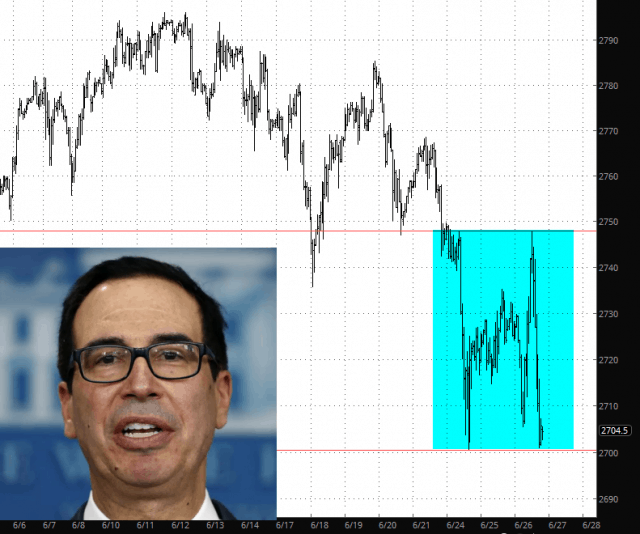 END_OF_DOCUMENT_TOKEN_TO_BE_REPLACED

We are doing the monthly free public Chart Chat on Sunday. If you’d like to attend then you can register for that on our July Free Webinars page. We are also running our annual July 4th weekend sale over the next few days, so over that period annual memberships purchased have four free months rather than the usual two. As with all our memberships, as long as the subscription is continuous, the subscription price will never be increased in the future.

After a slow start SPX is coming into the ideal low area 2680-2700 that Stan has been calling for the last few weeks. SPX is in the low window and we think that a low this week is likely. END_OF_DOCUMENT_TOKEN_TO_BE_REPLACED

I mentioned this yesterday; I must agree with the President on this one!