I am going to do a larger degree overview of the DXY, since I have not done one in while, and I have been getting a number of questions about it of late.  So, if you are following along, please take a look at the attached monthly chart, as I go through the progression of where I think we are in the larger degree time frames.

Back in 2011, we correctly saw the impending multi-year rally developing in the DXY, whereas most others were looking for the dollar to crash.  In fact, our target was 103.53, the 1.618 extension from the 73 region, which we exceeded by 29 cents before the market turned back down.  And, to put this market call into context, many of you may remember the certainty within the market that the dollar was going to crash due to all the QE thrown at it.  Yet, the exact opposite occurred, which clearly surprised most of the market . . . well . . . at least those who were not reading our analysis.

Initially, I had expected the turn down in the DXY from 103.53 to be a 4th wave, which would hold support at the 91.70 region, the 1.00 extension and common target for a 4th wave. However, when we exceeded that support to the downside, we then overlapped into what I was initially counting as wave 1 off the 2008 lows (now labeled as an a-wave), which then invalidated the standard impulsive structure I was tracking since that time.  This caused me to re-assess the entire structure since 2008, which has me viewing the larger structure now as a corrective rally into 103.82.

END_OF_DOCUMENT_TOKEN_TO_BE_REPLACED

Following is the opening segment of this week’s edition of Notes From the Rabbit Hole, NFTRH 504. For months now we have been tracking a divergence in the key cyclical Semiconductor Equipment segment (I am short AMAT & LRCX) to the broader Semi sector (ref. the most recent article from May 18th here) and this week we put more context to the divergence.

A Bull in a China Shop

In light of the developing trade war between the US and China, let’s review the all-important Semiconductor sector and in particular, the Semi Equipment segment, which is a key economic early bird (and canary in a coal mine).

Various sectors took hits on Friday as Trump moved forward with Tariffs on China. But most of those sectors and industries are follow-on aspects of the economic cycle, which got its start when the early bird chirped in early 2013.

With China in Trump’s crosshairs and China a very key player in Semi Fab Equipment, there is a fundamental reason that the Equipment companies are faltering. From SEMI by way of a post at nftrh.com in March.

“SEMI predicts Samsung will lead the pack in fab equipment spending in both 2018 and 2019, even though it will invest less each year than in 2017. By contrast, China will dramatically increase its year-over-year (YOY) fab equipment spending for the next two years – by 57 percent in 2018 and 60 percent in 2019 – to support fab projects from both overseas and domestic companies. The China spending surge will thrust it past Korea as the top spending region in 2019.” END_OF_DOCUMENT_TOKEN_TO_BE_REPLACED

We recently introduced a page that I don’t think has an equal on the Internet – – it tells you the present value of any equity investment you made in the past as well as the worst drawdown during the span of your personal holding period. You can use the page by clicking here.

I discovered, however, a mistake in the arithmetic on the original deployment. The drawdown would tell you how much you might lost from your entry price. I thought a more useful definition – – particularly given the psychology involved – – would be the loss from the peak value to the lowest value during any period of your holding. We’ve made this correction, and I think the improved results speak for themselves.

Have fun with the regret! It’s quite a painful page.

By Ryan Wilday, ElliottWaveTrader.net
In articles starting in April I discussed the bullish impulse we had seen off the April lows for nearly every coin I track. And, I discussed how the lows on May 28 were testing levels that, if broken, threatened the continuation of that impulse.Unfortunately, as of writing, those levels have broken. These levels were $7075 in bitcoin (BTC-USD) and $505 in ethereum (ETH-USD). And, while we have a few outliers in the cryptocurrency, most coins are following suit.Is all lost?While this can seem disastrous, especially for those with large holdings, I still believe we’ll see long-term support hold. In fact, most markets push bullish levels to the limit before bottoming, and I’ve seen it time and time again in the crypto market. This may be one of those times. But we must see. END_OF_DOCUMENT_TOKEN_TO_BE_REPLACED

Here is a quintet of stocks that are lesser-known but have been flying higher. In a few cases, these stocks were just battered to pieces, but they have managed to turn themselves around admirably. 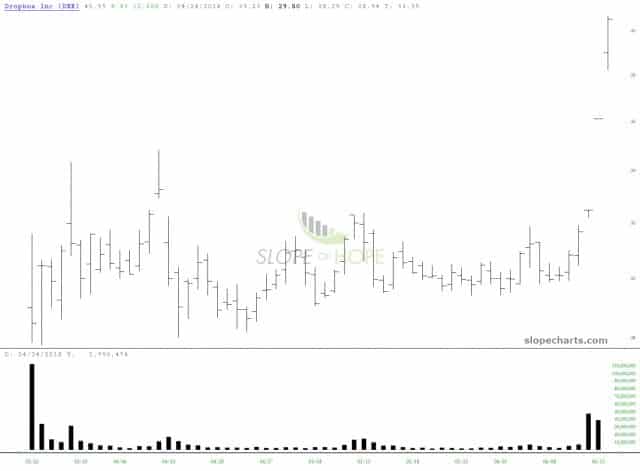 END_OF_DOCUMENT_TOKEN_TO_BE_REPLACED

I had a very busy, productive weekend, but in the midst of it, I commiserated with a number of fellow bloggers about the state of the market. Specifically, about how the hopeful days that started January 29th terminated far too swiftly on February 9th, and how we were grinding around at VIX-will-be-single-digits-again-land.

Their response, to a man, was pretty much “this is how bear markets start, with a shot across the bow, and then a big recovery rally to apply the smirk to bulls’ faces more firmly than ever and to break any remaining bearish hearts.” We’ll see if that holds true. For the moment, at least, it’s nice to wake up to some red. Here we see the NASDAQ has taken its entire end-of-week mega-rally and unwound it for really no reason in particular except for simmering trade wars. 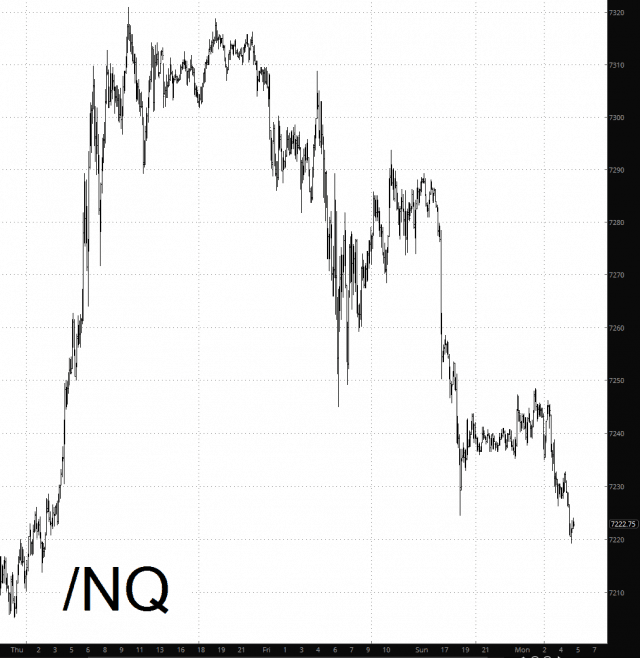