First of all, I’m pleased to let you know that the comments notifications via email work again! That is, when you “@” someone or when you click the Follow button on a comment, you will get those emails like the good old days. Please be prepared for a MEGATON OF EMAIL as the servers catch up with a month’s worth. Sorry about the spam, but it has to clear it all out.

I have another bit of good news for you, though: SlopeCharts now has the Pivot Points study.

Applying this study is done by clicking the Studies button in the upper right of SlopeCharts and clicking Customize. That brings up the dialog box with all the available studies. Click on Pivot to choose Pivot Points. In that tab you will see the checkbox (to display the study) as well as the dropdowns to change the default colors and the number used for the bar count. You will normally just leave these alone and check the checkbox then click Done.

END_OF_DOCUMENT_TOKEN_TO_BE_REPLACED

As a young man, I bought my house for the same reasons most people do: I was married and wanted to raise a family there. I wanted a nice big yard so I could have dogs. I wanted room to expand. I wanted to live in a safe, quiet neighborhood. So, in 1991, I was able to do all those things. It was a stretch, but we bought a small, run-down home on a large lot in a nice neighborhood in Palo Alto. 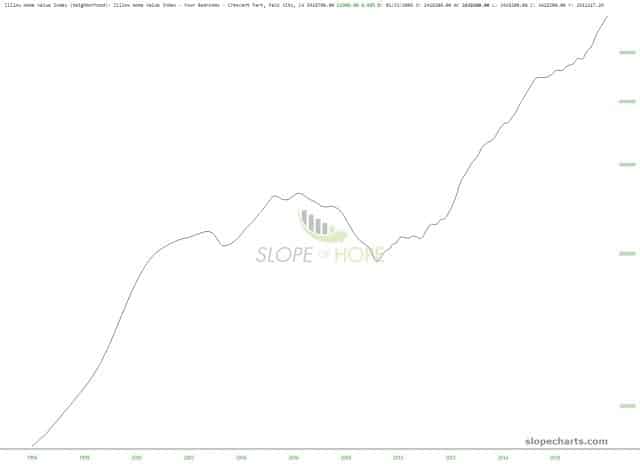 END_OF_DOCUMENT_TOKEN_TO_BE_REPLACED

We did our monthly free public Chart Chat yesterday and, if you missed that, you can see the recording posted on our June Free Webinars page.

ES/SPX has been forming a likely large bull flag over most of the last month, and the flag pattern is the unusual and very poorly named broadening formation, right angled and descending. I’m trying to think of a catchier name.

Be that as it may I like these patterns and, on ES overnight, that pattern has been starting to break up. The full target would be in the 2800-5 area, though we thinking we might see a retracement/backtest from the 2765-75 area, if the island top gap from the March high into 2752.021 can now finally be filled. Our expectation is that this gap should be filled today.

It’s clear that President Trump’s “America First” policy does not produce a “win-win” outcome for it and other world trading partners…at least, it has not been proven, yet.

So far, he’s only been successful in tearing up prior agreements related to the Trans Pacific Partnership, the Paris Climate Agreement, the Iran JCPOA, and has threatened to tear up the NAFTA with Canada and Mexico.

In fact, he has exacerbated tensions in current NAFTA negotiations by slapping hefty and punitive steel and aluminum tariffs on these two closest trading allies, as well as on the European Union…under the guise of “national security” concerns. END_OF_DOCUMENT_TOKEN_TO_BE_REPLACED

Bubbles in Nasdaq, bubbles in financial assets, bubbles in cryptos . . . bubbles are being reported everywhere. Moreover, more and more analysts are pointing to some financial crisis after another as each day goes by. Whether it is because of the cessation of QE, or because of the issues in Italy, or trade wars, etc., we are clearly not lacking for any reasons as to why this market should crash.

The problem is that most bubble-callers have no objective perspective through which they can determine that any market is in a bubble. As an example, one article I recently read suggests we are in a bubble in the Nasdaq because we have exceeded the 2000 bubble high in the market. Well, along those lines, maybe the Dow should not have exceeded the “bubble high” it struck in 1929!?

Now, I want to highlight the ultimate intellectual dishonesty and inconsistency in most of their thinking regarding bubbles. You see, many of these same analysts are looking for a massive rally in gold. Yet, one has to wonder why they can logically see gold rally well past its “bubble high” struck in 2011, but they are unable to accept any other market rallying beyond their “bubble highs” struck in recent history? I think one has to start viewing much of the analysis being published today as more emotionally-based rather than analytically-based.