Some of our fellow humans are racist. Some of them are sexist. Me? I’m browsist.

What I mean by that is that I have strong feelings and biases about browsers. I’m a Chrome user, and I see no reason to use anything else. In spite of being used by countless millions of people, Internet Explorer has long been heralded by engineers around the world as an absolute nightmare. I’ve never understood why such a popular product would be so awful, but it is.

Indeed, even back in 2002 when I was hiring for Prophet, our standard interview question was, “What kind of browser do you use?” We had agreed that IE would be an instant disqualifier. Happily, all the applicants had other answers. (At the time, Firefox was considered a very good response). 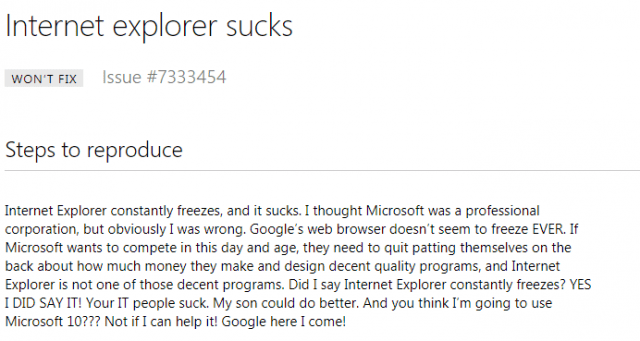 And the definition from the Urban Dictionary:

Having said all that, I’ve done precious little testing of SlopeCharts in IE. I was aghast to see on my own laptop that although SlopeCharts came up just fine in IE, it had one small problem: it didn’t show the chart. Just a big blank space.

Since Slopers tend to share such things among themselves, but not with me, I suspect this is common knowledge. However, having accidentally stumbled upon this obscure little flaw, I set about to fix it, and I’m glad to say it’s fix. So, to come straight to the point: if you’re an IE user and had trouble with SlopeCharts before, please do try it again. It – – umm – – – works now.