Near where I live, there’s a middling Chinese restaurant called Chef Chu’s. I’ve been to Chinese restaurants hundreds of times, but in spite of its proximity, I’ve gone to Chu’s maybe once. It’s the kind of place where white people eat and struggle with how to use chopsticks. Unless the menu is rife with misspellings and I’m the only white boy in there, I’m not that interested, because I know the food will be overpriced and inauthentic.

The reason I bring this up is because the little boy who grew up at that restaurant, John Chu, went on to become a famous director by way of the smash hit Crazy Rich Asians. It’s the kind of cultural marker which turns my stomach, because it’s a movie that gawks and gasps and gyrates over the insane wealth of a small slice of Singapore elite.

It’s fitting, I think, that production was wrapping on this envy-inducing worship of materialism just about the same time that Chinese equities were peaking. Indeed, the so-called “National Team”, China’s government apparatus charged with trying to prop up their phony stock market, hasn’t been able to deal with this nasty thing that I’m really fond of called Reality. 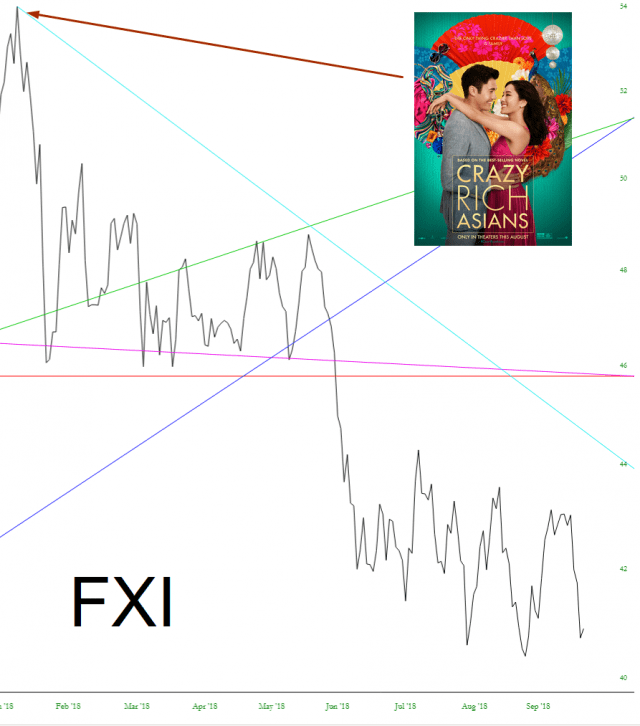 Last week, the Chinese markets were shuttered, but just this weekend, in a bid to try to prop up the ever-more-obvious weakness in their markets, the Chinese government once again trotted out hundreds of billions of dollars more in “stimulus” in a bid to keep the balls in the air. You can see how well this went:

Living here in the United States, I naturally don’t tend to trade this stuff (except for positions here and there such as BABA), but I think the relationship between cultural excess and financial markets to be universal and well as contrarian. As global markets continue to spin out and rupture, it’s heartening to see that we’re all going to hold hands and do it together.