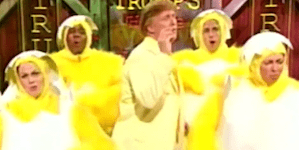 Here is the entire article (blurb)…

President Donald Trump unleashed another attack on the Federal Reserve, calling the central bank his “biggest threat,” in an interview he gave to Fox Business Network. “My biggest threat is the Fed,” Trump said, according to excerpts released by the network ahead of an interview to air at 8 p.m. Eastern. “Because the Fed is raising rates too fast and it’s independent so I don’t speak to them but I’m not happy with what he’s doing because it’s going too fast because you looked at the last inflation numbers they are very low.” When pointed out to Trump that he nominated Jerome Powell instead of Janet Yellen, the president said he wasn’t blaming anyone. “I put him there and maybe it’s right maybe it’s wrong but I put him there.” He also referenced the other nominees to the Fed he’s made. “I put a couple of other people there I’m not so happy with too but for the most part I’m very happy with people.”

“Because the Fed is raising rates too fast…”

The 2 year note players in the bond market are and have been raising rates too fast if anybody is; and I don’t think they are. But Trump does have a point in that it appears the Fed is playing catch up on his watch after being way too slack on the previous administration’s watch (as I used to routinely bitch about).

Fact: The 2 year yield began rising back in 2013, which was when we originally noted the early signs (canaries in a coal mine chirped) of an economic up cycle with the brewing uptrend in Semiconductor Equipment sector bookings. The 2yr bond market was right. The Fed meanwhile, sat on its ample behind and maintained the ZIRP abomination for another 2 years, rubbing salt in the wounds of savers and Main Street in general while those in control of capital and assets got a hell of a lot richer.

And what happened then? Bueller? Anyone? Yes! Main Street elected a populist TeeVee character to put things right because Main Street had had enough abuse from what it would call the elites. The chicken that came home to roost had orange feathers on its head and a really demented look in its eyes. The chicken can be excused for being upset about a now firm Fed, under the right-minded Jerome Powell.

But I don’t think it’s so much a political thing as a bad luck thing for Trump with respect to the Fed’s policy. That is because the Fed finally began to start playing catch up in late 2015, a year before Trump was elected. But he is paying a price of sorts right now. So stop clucking you chicken and just deal with it. The Fed is getting in line with the bond market and that needs to continue.

Original version of this article here.