Like a shooting star press, the stock price of WWE rose up fast in 2018, coming within spitting distance of that psychological $100 level in less than a year.

But this isn’t the first time we’ve seen Vince McMahon’s baby shoot higher and form a parabola. And the chart now shows a similar pattern to that first time. 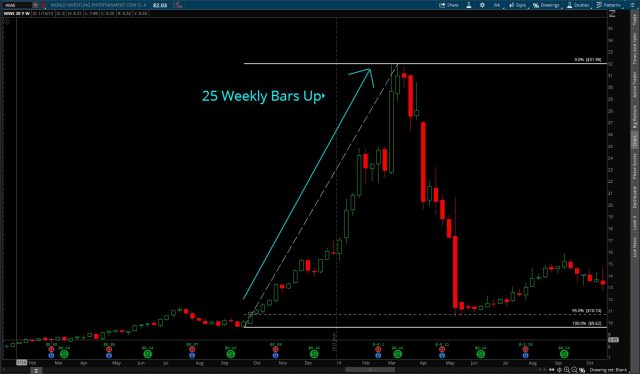 Rumors of the WWE Network’s formal launch after several years of false starts began to build. Analysts dreamed of the revenue boost, and began upgrading the stock. The paid subscription streaming service officially launched in late February of 2014. Prices spiked during the typical “Buy the Royal Rumble, sell Wrestlemania” period (January to early April). And then the breakout failed post-Wrestlemania, as the stock retraced down more than 95% of its pop from late September.

The parabola pop took 25 weekly bars, while the drop took only nine.

Fast forward to 2018, and the stock saw a key breakout in late January. 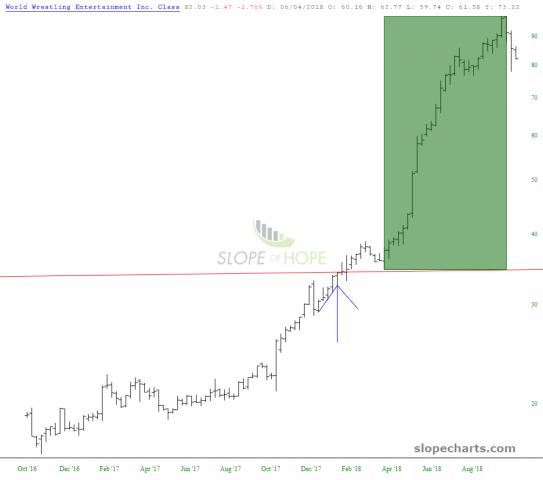 The weekly bar for January 22-26th closed above the prior all-time high of $34, and began a Netflix like surge of nearly 200%.

Following a pause in March, the move to the new all-time high in September took 26 weekly bars (April low to September high). That’s one more than the 2014 surge.

The visual similarity of the 2014 and 2018 surges also show a short pause just beneath their tops, then a last push before selling began in earnest. 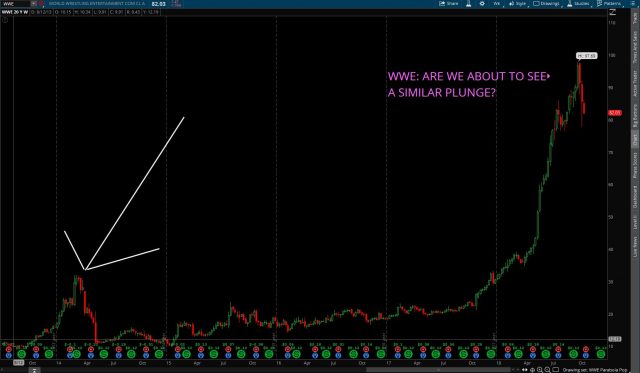 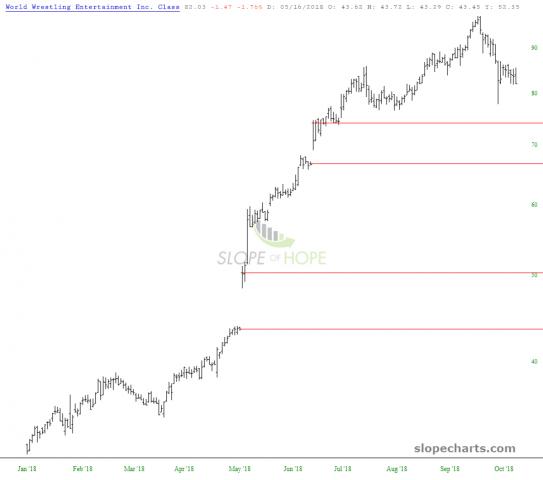 There are also a few non-technical factors to consider:

#1 – The WWE is taking extreme heat from members of the Senate for not postponing its upcoming “Crown Jewel” event in Saudi Arabia. The event is part of a multi-million dollar ten-year deal with the Kingdom.

#2 – There is a McMahon currently in the Trump Administration. That would be Vince’s wife Linda, who is the head of the Small Business Administration.

#3 – Wrestling fans’ angst at how the WWE books its talent. I won’t go into too much detail (wrestling fans already know, and others won’t care), but basically the fan base is upset at the push being given to certain wrestlers seen as “preferred” by management, versus who the fans actually cheer for.

Should a similar bear move play out, Vince may have a flashback to this famous Smackdown laid on him by three of the most popular wrestlers in WWE history.

Full disclosure: TK is already short, and I got filled on a November 75-70 put spread for 95c, and January 50-puts Friday for 47c.